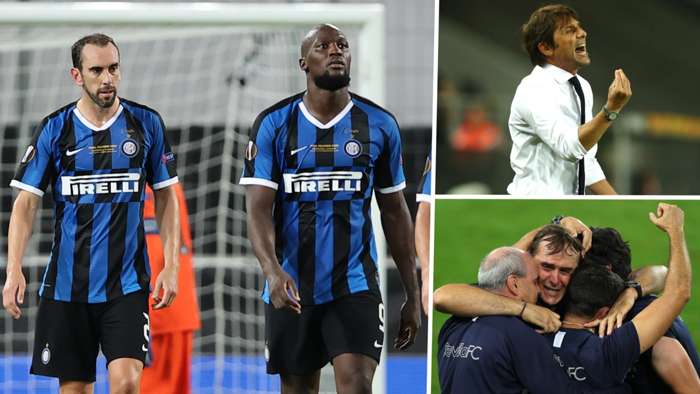 Antonio Conte had argued before Friday's Europa League showdown with Sevilla that when it comes to finals, "we only remember those who win".

Romelu Lukaku, for example, is made of stern stuff; he has known his fair share of struggle in his life. But this 3-2 defeat is likely to weigh heavily on his mind for a long time to come.

He had dreamed of playing for Inter since watching Ronaldo inspire the Italian club to victory in the 1998 final with a mesmerising display against Lazio.

By opening the scoring against Sevilla, he equalled his idol's record of 34 goals in his first season at San Siro.

Lukaku, though, also concluded the scoring, unluckily deflecting an overhead kick from Diego Carlos into his own net with just 16 minutes remaining.

That the Brazilian shouldn't have even been on the field only added insult to injury.

It was Diego Carlos who had taken Lukaku down in the area as he raced away from the Brazilian just five minutes into the game.

Remarkably, the Brazilian was only shown a yellow card by referee Danny Makkelie – despite cynically denying Lukaku a clear goalscoring chance.

Despite the injustice, Lukaku and Inter will probably blame themselves for this defeat.

After all, with the game tied at 2-2, Lukaku squandered a one-on-one with Sevilla shot-stopper Yassine Bounou.

Of greater significance, though, was the fact that Inter struggled to truly exert themselves on the game. It was Sevilla who dictated the play and dominated possession for the majority of the 96 minutes of play.

Those victories may have come across different eras, with different players and coaches, but Julen Lopetegui's side exhibited the same stubbornness.

Just like the semi-final against United, Sevilla simply refused to be denied by what they must feel at this stage is their trophy.

Luuk de Jong scored arguably the best headed brace you'll ever see in a final, and it was no coincidence that the Lukaku own goal stemmed from Inter's inability to once again deal with a Sevilla set-piece.

Inter, to their credit, kept battling until the end and Alexis Sanchez had a shot cleared off the line, which only intensified their sense of misfortune.

Conte, though, has little time for hard-luck stories.

"History," as he pointed out beforehand, "is written by the winners."