Lukaku delivers his verdict on Man Utd: They're going in the right direction 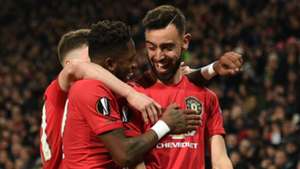 Romelu Lukaku sees Manchester United heading in "the right direction", with the Inter striker saying the Red Devils will "get there" under the guidance of Ole Gunnar Solskjaer.

The Belgium international was among those to head for the exits at Old Trafford in the summer of 2019.

His departure left an attacking void for Solskjaer to fill, despite questions having been asked of his value and contribution to the cause.

Finding another reliable option in the No.9 role has not been easy, with United having used Marcus Rashford, Anthony Martial and January signing Odion Ighalo as a focal point in the final third.

There have also been issues to address elsewhere on the field, with defensive leaks having sprung and Paul Pogba forced to spend much of the campaign stuck on the sidelines through injury.

Progress is being made, though, with Bruno Fernandes proving to be a shrewd addition, and Lukaku expects United to hit their ultimate goals in time.

He told an Instagram Q&A session when quizzed on his former club: "They are going the right direction.

"It's a process, but they will get there."

Some of those he once competed for minutes with are expected to lead the charge for United.

Academy graduate Rashford has an important role to play, despite currently being stuck on the sidelines through injury.

The 22-year-old has posted a career-best return of 19 goals this season, having switched between central and wide attacking roles, and Lukaku is not surprised to see the England international thriving.

He said of Rashford: "Not surprised about what he is doing. He [has] been working hard."

Lukaku opted to walk away from competition with Rashford and Co in order to take on a new challenge in Italy with Serie A title hopefuls Inter.

He has impressed at San Siro, registering 23 goals in his debut campaign, and appears to be enjoying his football again after enduring a frustrating end to his time in England.

Lukaku told the New York Times in December of his spell with United: "It was always, 'Yes, but ...' right from the start.

"I scored against Real Madrid in the European Super Cup but missed a chance. It was: 'But he missed that one.'

"I scored against West Ham in my first Premier League game: 'Yes, but...' From then on, I started to wonder how it was going to go."

Lukaku found the target 42 times for United in 96 appearances, and is a member of the Premier League 100-goal club, but was never truly embraced by a demanding fan base.