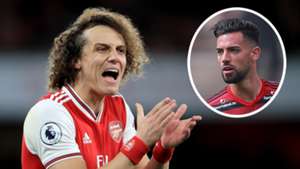 David Luiz considers new Arsenal centre-half partner Pablo Mari to be a "great player", with the January arrival at Emirates Stadium enjoying an "amazing" debut in an FA Cup clash with Portsmouth.

A Spanish defender snapped up on an initial loan agreement with Flamengo during the winter transfer window was handed his bow for the Gunners at Fratton Park on Monday.

Mari put in an assured performance as Mikel Arteta's side collected a clean sheet from a 2-0 win and edged a step closer to major silverware by booking a place in the quarter-finals of domestic cup competition.

There will be tougher tests for the 26-year-old to come, but Luiz is among those to have been encouraged by the speed in which fresh faces have settled and the maturity being shown by exciting youngsters.

The Brazil international told Arsenal's official website: "I'm so happy for Pablo, he's a great guy, a great player and he had an amazing game so we are here to help each other and we are here, 25 players, ready to play, ready to play for Arsenal and ready to give the best job.

Arteta saw his side offer the perfect response against Portsmouth to the disappointing Europa League last-32 exit they had suffered at the hands of Olympiacos in their previous outing.

Luiz claims to have never had any concerns regarding the spirit inside Arsenal's camp, adding on a team that is chasing down FA Cup glory and a top-four finish in the Premier League: "I think it's really important to continue what we're doing every single day.

"We are improving a lot but you have to be humble and we understand we are not there yet.

"We have to do the similar kind of things, in our last game we did amazing things, but we lost. This is football.

"Of course, we have to understand why we lost and [against Portsmouth] I am so pleased for the team, with everybody, with the young boys because they are improving a lot, every single day.