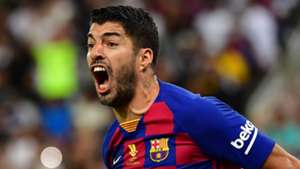 Barcelona have received a boost with the news that Luis Suarez will be fit to take part in next weekend's La Liga clash against Mallorca, the club have confirmed on their official website.

The Catalan outfit had been without Suarez since January, when he underwent surgery for a knee injury that had been expected to end his season.

However, the coronavirus pandemic put a pause on the Spanish top-flight campaign in the middle of March and play will not resume again until next Saturday.

The silver lining for Barca is that they will have the Uruguay international back in the fold almost five months to the day that he went under the knife, confirming that he began training normally on May 8.

It will be the first time that former Real Betis coach Quique Setien will have the player at his disposal, having replaced the sacked Ernesto Valverde on January 13.

The news comes hot on the heels that Lionel Messi was spotted sprinting at Camp Nou only a day after the club had confirmed that the six-time Ballon d'Or winner was carrying a knock, giving fans very real hope that the Argentine ace will be fit.

Suarez's prolonged absence, combined with that of Ousmane Dembele, meant that Barca were allowed to dip into the transfer window to sign an emergency replacement in the form of Denmark striker Martin Braithwaite from Leganes. But the former Liverpool man will be hopeful of rapidly restoring himself to the starting XI given the strong form he had shown early in the season.

Suarez, whose last outing came in the Spanish Super Cup against Atletico Madrid on January 12, has scored 14 times in 23 outings for Barca this term, including 11 in the league, while he also posts seven decisive passes in the Primera Division - a tally that puts him third in the league.

Barcelona currently reside two points clear at the summit of La Liga with 11 matches of the campaign remaining, while they retain an active interest in the Champions League, having drawn the first leg of their last 16 encounter with Napoli 1-1 in Italy.