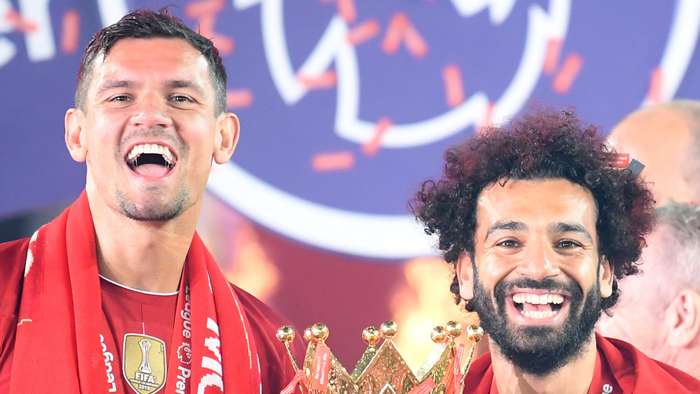 Dejan Lovren says he is sad to leave his "good friend" Mohamed Salah and "big family" at Liverpool after his switch to Zenit St Petersburg.

The 31-year-old became a Premier League title winner in 2019-20, but only featured in 10 gamesfor Jurgen Klopp's side after falling behind Virgil van Dijk and Joe Gomez in the squad pecking order.

The Croatia international was a popular figure in the dressing room throughout his time at Liverpool, and Salah led the tributes to the defender following his exit.

“I don’t know how to say, my friend. You don’t know my feeling right now. We’re really going to miss you a lot, especially me," the Egyptian told the club's official website.

Lovren was visibly emotional after his final appearance in a Red shirt against Newcastle on Sunday, and he has now said his final goodbyes as he embarks on anew challenge in the Russian Premier League.

The centre-back singled out Salah during an in-depth interview with Liverpool's official website, stating: "I don’t want to show too many emotions because I’ve already been crying before the last game. They saw that I felt the emotions.

"Especially also leaving Mo, my good friend. It was something special but like I always said, it’s just the beginning of a big friendship, even when we’ll be far apart.

"He knows he can always call me for whatever reason, I’m always here for him. It’s not just Mo, it’s all the people at the club – the staff, medical staff.

"We’ve been like a big family, and this is why Liverpool is so big: because we care for each other. I wish everyone good luck and I want that they stay healthy. We will always be in touch."

Asked how it felt to be a part of Liverpool's first title-winning squad in three decades, Lovren responded:"Incredibly proud. You cannot imagine the emotions I still have, especially from before the last game. Liverpool lifting the trophy, unfortunately not with our fans, but we know in our hearts they have been with us from day one.

"So, I will carry this forever. Forever. I can proudly say later to my grandkids that I played for Liverpool that year when Liverpool won the Premier League. This one will never be forgotten. So I’m really proud."

He went on to highlight the impact Klopp has had on his career and Liverpool Football Club as a whole, describing him as a father figure with a unique, wholesome approach to management.

"Not just football-wise; he also changed things around the club, he got the belief from the supporters and even in bad moments fans were sticking around always. It’s great to see that.

"I had many problems and only he knew the problems. He was like a friend for me, like a dad, who I could come to and say all the problems.

"One day, we will look back and we can laugh all together and share good memories. This is what we’ll do."

Lovren concluded by expressing his gratitude towards Liverpool's supporters, adding:"I just want to thank you from the bottom of my heart for supporting me in bad moments, on the worst days, and in the best moments.

"You saw me crying, you saw me smiling but you know I left everything on the pitch. Also around the pitch, I tried to be the best member of the club to show that I really care for the people, for the Liverpool supporters.

"I hope you are happy with that. Like I said, I will always be a Red – you have a new supporter now from Croatia. Thank you again and see you soon."