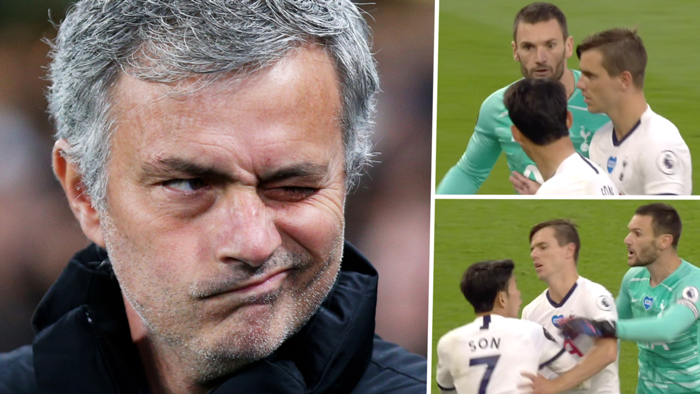 Tottenham manager Jose Mourinho says the physical altercation between team-matesHugo Lloris andHeung-min Son during the 1-0 win against Everton on Monday was 'beautiful'.

Despite Spurs leading by a single goal as half-time started, Lloris and Son had to be separated by team-mates Giovani Lo Celso and Harry Winks as the Francegoalkeeper aggressivelyconfronted the South Korean attacker.

The duo solved their differences during the half-time break as Spurs went on to winthe match with Michael Keane's 24th-minute own goal the only score of the match.

Lloris admitted post-match that his anger was sparked by a lack of pressing from his team-mates, with Mourinho suggesting post-match that the disagreement between his players was born out of the team's recent poor performances.

When asked about his view on the incident, Mourinho said: "Beautiful.

"It's probably the consequence of our meetings. If you want to blame somebody for that, it's me. I was critical of my boys because they are not, in my opinion, critical enough of themselves or each other.

"It was a situation at the end of the first half where an amazing kid that everybody loves like Sonny, a team boy, but in that situation the captain thought he had to do more for the team, you have to give a different effort than you gave.

"I was really pleased. At half-time I told them, when you had this reaction that I had no doubts that you would stick together until the end."

Spurs have dropped to eighth on the Premier League table, having won only two of their four matches since the competition restart last month - leaving the side 10 points adrift of Chelsea in fourth position.

Mourinho believes the negative reaction between his two players shows the level of investment andfrustration within the playing group at their own recent performances.

"I could be very protective of my team and my players and put all the blame in referee Michael Oliver, lots of people did it and rightfully so. But inside closed doors I was going in another direction – forget Michael Oliver and focus on our performance."

Tottenham's next league match will be on the road at relegation battlersBournemouth on Thursday night.