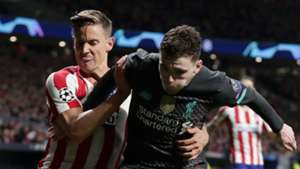 Anfield will be hoping for another famous European night when Liverpool take on Atletico Madrid in Wednesday's Champions League last-16 clash.

Jurgen Klopp's men are looking to come from behind after losing 1-0 in Madrid in the first leg, their seventh defeat in 11 away matches in this competition.

Unbeaten in 25 European home games, they come into this matches as clear 11/20 (1.55) favourites with bet365 to get back into the tie with a victory in front of their own fans.

Atletico have only won two of their previous 12 away matches in this competition, but are priced at 11/2 (6.50) to pull off a shock by coming out on top here.

Eight of the guests' last 13 away matches have resulted in draws, and there are odds of 29/10 (3.90) available on them grinding out a stalemate in this one.

Andrew Robertson and Jordan Henderson should be back in contention following injury, although Alisson and Xherdan Shaqiri are both sidelined.

Renan Lodi, Thomas Lemar and Alvaro Morata will all be assessed after only recently returning to training following injury.

Although definite underdogs when the draw was made, Diego Simeone's team looks in a strong position to progress following their slightly surprising victory in the first leg.

Indeed, the Reds have been fairly unconvincing since the 1-0 defeat in the Spanish capital, losing two of their four subsequent matches and failing to keep a clean sheet in all four.

Having scored six times in their three games since the first leg, Atletico may back themselves to put the tie beyond doubt by grabbing a priceless away goal on Merseyside.

Liverpool vs Atletico Tips and Predictions

Considering Liverpool haven't failed to score in 29 matches since last February's goalless draw with Bayern Munich, even money (2.00) offers solid value on them joining their opponents on the scoresheet for the fifth time in seven Champions League games.