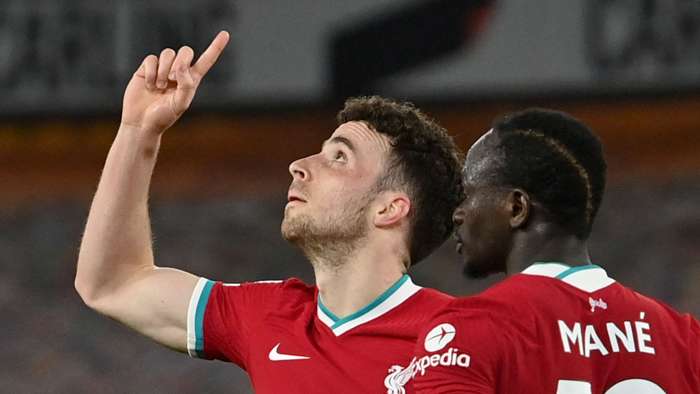 Liverpool forward Diogo Jota reflected on what he called a "special game" after he helped Liverpool take down his former club Wolves on Monday.

The Portuguese forward scored the lone goal in the Reds' win, which marked the club's second victoryin its last eight Premier League matches.

Wolves sold Jota to Liverpool lastsummer for a£41 million ($53m) fee, with the attacker proving effective when healthy for the Reds this campaign.

"We are in poor form so we need to change that. Today was a good game and we did our job," he told BBC Sport.

"It's a special game. I worked here for over three years. I know almost everyone in that dressing room. I just wish the fans could be here to make it even more special.

"The goal meant a lot and it helped the team I represent now. It was really, really important today. The break comes not in a good moment. We had two wins, two clean sheets so we could have built some momentum.

"It was really, really important [to score]. As a striker, I always want to be involved in goals. I had opportunities I didn't take in the Champions League. It's a good feeling to be back on scoresheet.

"If we play the way we have here I think we have a chance [of the top four]."

After making the move from Wolves this summer, Jota instantly asserted himself as a key part of Liverpool's attack, offering Jurgen Klopp that long-awaited attacking option to rival the trio of Sadio Mane, Mohamed Salah and Roberto Firmino.

He got off to a strong start at Anfield, becomingthe first player sinceRobbie Fowlerto score seven goals in his first 10 Liverpool appearances.

However, Jota suffered a leg injury in December, ruling him out for two months, with Liverpool's tailspin beginning soon after.

Jota made his return in late February, and, with Monday's goal haul, now has nine goals in his first 20 Liverpool appearances.