Liverpool seeking 'another special night at Anfield' against Atletico - Milner 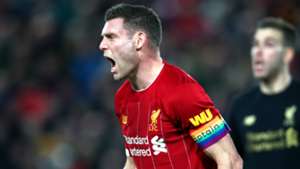 James Milner acknowledges that Liverpool are facing a tough task to overcome a "well organised" Atletico Madrid in the Champions League, but he believes the Anfield atmosphere can help inspire a turnaround.

The Reds were beaten 1-0 in the first leg of their round-of-16 tie at Wanda Metropolitano, with Saul Niguez's early effort ultimately proving to be the difference between the two sides.

Jurgen Klopp's men have also suffered a couple of damaging domestic defeats since returning to action following the winter break, with a 3-0 reversal at Watford bringing their 44-game unbeaten run to an end.

An FA Cup exit at the hands of Chelsea was to follow, but Liverpool got back on track with a morale-boosting 2-1 home victory over Bournemouth on Saturday.

The Merseyside outfit are now only two games away from Premier League glory, but their focus must now switch to the return meeting with Atletico.

Milner says Liverpool will head into Wednesday's game in good spirits after getting back to winning ways, as he targets "another special night at Anfield" in an ongoing bid to defend their European crown.

"I think obviously coming into that game off the back of a good result is pleasing, it gives us a good feeling," Milner told the club's official website .

"The crowd will be right with us, they were with us again, and it'll be a special night - it always is, so it's down to us to turn around a tough result.

"We know how good they are, we know how well organised they are but hopefully we can push them all the way and overturn that and have another special night at Anfield."

By beating Bournemouth at the weekend, Liverpool extended their run of consecutive home wins in the top-flight to 22, setting a new record in the process.

"I think obviously it's an incredible place to play football, the fans and the stadium," Milner said of Anfield.

"You look at how amazing the teams have been through the years for Liverpool and teams for Shankly and things like that, to be mentioned in the same level as those guys and to be up there with the records is special for us and that's what we want to keep doing.

"The hunger is there, you can see it from the boys and we just want to keep winning trophies and breaking as many records as we can."

Milner added on Liverpool striving for improvement after an unexpected dip in form: "It's always going to happen. No team goes through a season without having a couple of performances which aren't at the level.

"It happens, it's a long season and you see how many games we've played and any sport you play, it's impossible to be at your highest level all year, year in and year out.

"You try your best and it just doesn't happen, and that's when you need to find a way to win. We've done that but we need to get back to the level that we know we can perform at.

"But the boys are working hard, you can see that it's not through a lack of effort and the two finishes were clinical from the lads up front.

"We could have closed it out as well but they had chances as well, so there's plenty to look at on what we can improve on."