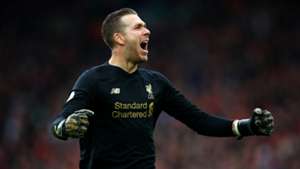 Liverpool goalkeeper Adrian insists that the Reds' winning mentality is back following the club's return to winning ways against Bournemouth on Saturday in the Premier League.

Jurgen Klopp's side had been on course to finish the season unbeaten, but a Champions League loss away to Atletico Madrid in February marked the beginning of something of a slump for the German's men as they went on to record defeats against Watford and Chelsea.

Liverpool fans will hope that taking three points off of the Cherries this weekend will put them in good stead as they endeavour to overturn a 1-0 first-leg deficit against Atleti on Wednesday and Adrian, deputising for the injured Alisson, believes that to be the case.

"It was a tough game after a few bad results," the Spaniard said after Saturday's 2-1 result. "The confidence of everyone was a bit down but I think today we showed the winning mentality is back.

"The team came back after the the early goal from Bournemouth and we showed again that we are here to face the end of the season and face the big challenges that are coming.

"It was really important to get the three points to get that confidence back again, 100 per cent. I think the experienced players have to show character out on the pitch.

"I think today we showed character, we came back into the game, we scored two good goals with Sadio [Mane] and Mo [Salah]. They are back to scoring again and that is very important for the strikers to get confidence."

Character and confidence will play a bit part in any attempted comeback on the European stage, but another positive on Liverpool's side is the fact that they play at home.

Adrian added: "On Wednesday we face a big challenge against Atletico Madrid here at Anfield. We need to come back against the result in Madrid but Anfield will be on fire for sure. The fans will be supporting from the first second.

"I think we know the style of play of Atletico. We have to prepare in the next few days as well as possible to try to keep the ball, be patient, move the ball quickly, because for sure they are going to [try to] defend the result here.

"But it's going to be difficult for them to defend again for 95 minutes - here at Anfield it's a different history. Madrid was Madrid but now we have the second leg here. We are going to win the game for sure."