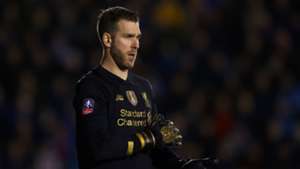 Adrian insists that Liverpool have "three finals" to contest over the next eight days, with little margin for error remaining in their ongoing bid to secure a historic treble.

The Reds are closing in on a first league title in 30 years having established a 22-point lead over reigning champions Manchester City after 28 fixtures.

Jurgen Klopp's men need just four more wins to confirm their coronation, but a dip in form following the Premier League's winter break has seen their credentials questioned in some quarters.

The Reds limped to narrow victories over Norwich and West Ham, with a 1-0 Champions League last-16 first-leg defeat against Atletico Madrid wedged in between, before being humbled at Watford on Saturday.

The Hornets handed Liverpool their first top-flight loss of the season at Vicarage Road, winning 3-0 thanks to an Ismaila Sarr double and a Troy Deeney strike.

Klopp will be hoping for a quick response when he takes his side to Stamford Bridge to face Chelsea in a fifth-round FA Cup tie on Tuesday night, before focus shifts to a meeting with Bournemouth on Saturday.

Liverpool will play host to Atletico four days later, with Adrian acknowledging the fact all three games are must-win if the team are to remain on course for three pieces of silverware.

"The first one is on Tuesday, we are preparing for that game. We are more than ready to go there and win that game against Chelsea.

"It's going to be tough but we're going to have our supporters from Liverpool in the crowd. Then Bournemouth are coming, the Premier League is back.

"We need to bounce back from the defeat against Watford and we play at Anfield, so we hope to show our fans that was just a bad game and we are still there.

"And the next one is Atletico Madrid, it's also going to be a really tough game in the Champions League. It's another final as well, we need to come back from 1-0 down.

Adrian went on to praise Klopp for his man-management skills, while offering an insight into the mood within the dressing room following the surprise defeat at Watford.

"He knows how to manage; he's not just a coach, he's a great manager," Adrian added. "He manages very well all the people in the dressing room, he manages the psychological and mental stuff. It's more about us.

"You need to find the target, we can't just wait for the time and wait for the game. We have to go for them from the first one; the Premier League is against Bournemouth the next one, the FA Cup is on Tuesday against Chelsea, and then our next target is Atletico Madrid.

"We had a nice meeting after the defeat against Watford - no complaining, not telling people what mistakes they made or not.

"Last Saturday was not the best moment for us performing on the pitch. We are much better than that and we want to show that in the next ones, for sure."