Liverpool must up their game to defend Premier League title, says Milner

Liverpool must up their game to defend Premier League title, says Milner 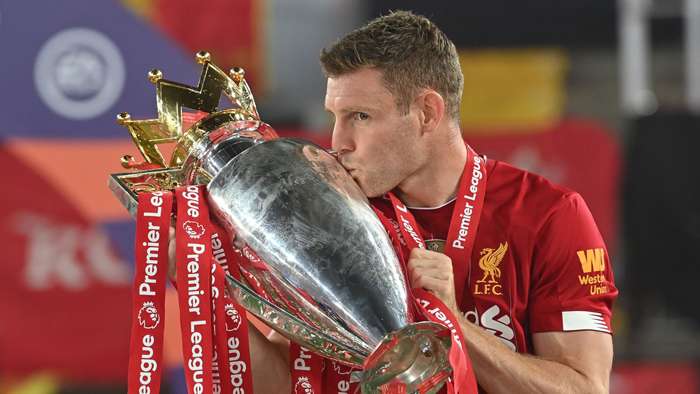 Liverpool must up their game to defend the Premier League title, according to James Milner, who says "if we’re at the level we’re at now next season, it won’t be good enough".

Liverpool had won 27 of their opening 29 fixtures when the countrywide lockdown came into effect, and they faced an anxious wait to resume their march to glory amid calls for the campaign to voided.

The Premier Leaguewas eventually cleared to restart on June 17 amid a significant drop in Covid-19 cases across Britain, and the Reds got back to business with a draw against Everton and a comfortable win over Crystal Palace.

They were named champions for the first time in three decades following Manchester City's defeat at Chelsea, but their coronation was soured somewhatas they fell to a heavy loss at Etihad Stadium in their next outing.

Liverpool were beaten 4-0 by City after being given their first guard of honour, and went on to drop more points against Burnley at Arsenal before wrapping up the year with wins against Chelsea and Newcastle.

Klopp's side ended up recording 99 points, but fell short of City's all-time record due to their patchy form over the last few weeks.

Asked how the Reds will make sure they rediscover their consistent streak tostayon the silverware trail in 2020-21, Milner told the club'sofficial website:“I think it’s getting that balance right. We have to enjoy it because we know how hard it is to win trophies, we’ve been very good to do it but also lucky to win the amount of trophies we have had this year.

“Trent Alexander-Arnold thinks it’s absolutely easy! He just turns up and wins trophies every year! I can assure you, with the amount of years I’ve had in my career, it’s not that easy.

"The amount of training sessions in the rain, the times when you’re injured and that sick feeling you get when you lose a game or even a five-a-side at Melwood. We’re shocking losers, all of us.

"When you win something, you have to enjoy it. That’s what it’s all there for, that’s the hard work and you look at the teams you have beaten to get there – it’s an incredible achievement.

“It’s a short career and you don’t want to waste a season or two seasons thinking, ‘We were that good a team but we took our eye off the ball and didn’t deliver.’ That would be criminal and something we definitely don’t want to look back at.

Former City midfielder Milner added on winning the third Premier League crown of his career and going down in the history books at Anfield:“It’s always special as it’s incredibly difficult to do.

“But how long this club has waited and how desperate they were for it, you see the history, all the times they’ve won it before and the Wall of Champions. I’ve said a number of times to you guys how desperate I was to change the numbers on that board and to be able to do it a few times in a year is great and special.

“It’s special when you’re driving around the city and seeing the flags outside people’s houses and how much it means to everyone. It means a lot to us because it’s what we’ve been striving to achieve as a group.

“The fans have waited so long and you think of the different generations: people have seen it before and have been desperate for it to happen again; fans who weren’t born the last time it happened and have heard about all this success but have never seen it themselves.

“When you think about those generations, it does make it special and you feel proud to be a part of it.”