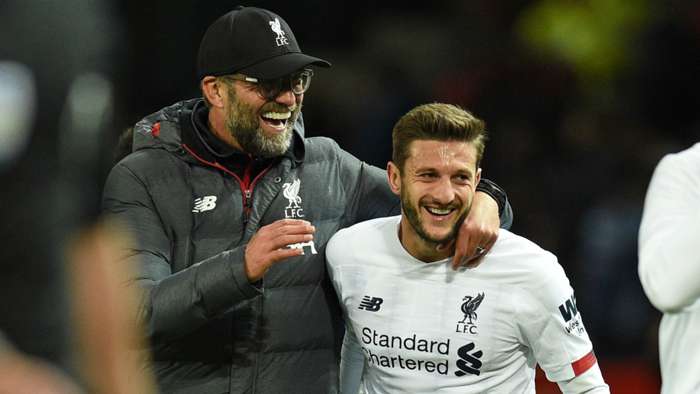 Jurgen Klopp lauded Adam Lallana as a Liverpool "legend" after conceding the midfielder has probably played his last game for the Premier League champions.

Lallana penned an extended contract at Anfield to cover the conclusion of the prolonged 2019-20 season but will depart when the campaign concludes.

The 32-year-old has not been in any of Klopp's four matchday squads since the restart and the Reds boss explainedhe is looking at the bigger picture of the player's prospective next move. He does not wantto risk a recurrence of the injury problems that have dogged the England international's timeon Merseyside.

Speaking ahead of Wednesday's Premier League trip to Brighton and Hove Albion, KlopppraisedLallana's service throughout his time at the club -the ex-Southampton playmaker's familiarity with Mauricio Pochettino's high-pressing style making him a valuable presence during thosetransitional early months.

More recently, Lallana's diligence on the training ground was citied as an important factor in Liverpool's march to European, world and, finally, Premier League glory.

"Adam is, oh my God… it's clear that Adam will leave the club," Klopp said. "If you know ask me now, I miss already everything about him and he's still here.

"He is an outstanding player, one of the most influential players in training quality I've had in my life. He's an incredible professional.

"Now we have a difficult situation, I respect that a lot. Everything with Adam is sorted – he's top fit, he's training, everything is fine.

"But the future is his future. If we need his help on the pitch, we can get it. He's there and trains 100 per cent.

"As long as we don't need it, he will just train. That's the normal thing. There were a lot of discussions with players about ending contracts. Here it was not even a discussion. It was clear for Adam, we extend his contract. He wanted to do that as well.

"But we will not put any risk on his future. That is absolutely clear. He is one of the most important players of the time since I'm here.

"I wish him only the best for the future and, from my point of view, he is already a legend here.

"He can now start being a legend somewhere else from next season on."

Liverpool's five remaining Premier League matches could prove more significant for those others who serve as back-up to a dominant first XI.

Thelikes of Alex Oxlade-Chamberlain and Divock Origi could enjoy increased game time but, much like Lallana, Klopp iskeen not to have such players overlooked when it comes to considering their role in a glorious period.

"We played against Barcelona, for example, made a lot of changes in this game, played an outstanding game – one of the best games this team ever played," he said of last season's logic-defying 4-0 win over the Catalan giants the Champions League semi-finals, with Origi's brace sealing a 4-3 aggregate triumph.

"Whatever your first XI is –I don't know exactly, but I think I have an idea –these boys all did the job.

"Oxlade-Chamberlain, if he's not in your first XI, has played incredible games for this club. He won pretty much alone against City a year or so ago. He's not a worse footballer since then."

A satisfaction with his back-up option does not mean Klopp will not look to bolster his title-winning pack, even if he acknowledges the uncertainty of the wider global climate might have an influence.

"Are there players out there on the market who can help us? Probably, yes," he added. "This is the challenge for us, to improve a really good football team. But these times area challenge as well.

"It goes back to how nobody knows what the future will hold for all of us. So how can we make really expensive decisions for how we will deal with it?

"This team is really good. That doesn't mean we don't want to strengthen. If we have the opportunity and have the financial resources then it will always happen and we will always try."