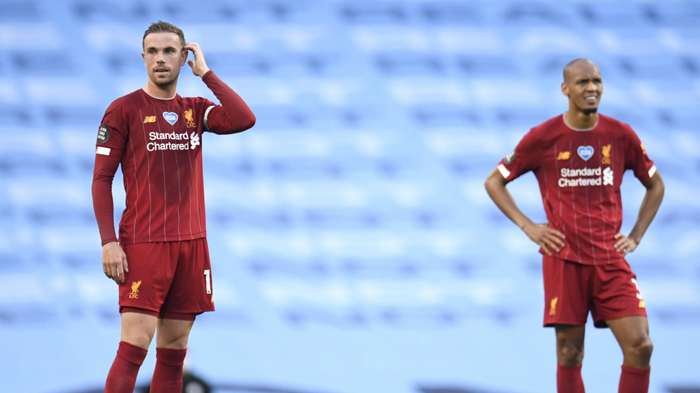 Newly-crowned Premier League champions Liverpool were brought down to earth with a bump on Thursday when they fell three goals behind at half-time in a Premier League game for the first time in five years.

Jurgen Klopp’s side have spent the past week celebrating the club’s first title win in 30 years, secured courtesy of Manchester City’s defeat at Chelsea,meaningonly pride was on the line when the Reds travelled to the Etihad Stadium to take on the side they had just deposed as champions.

Liverpool certainly played like little was riding on the game during the first 45 minutes. City, in contrast, performed like they wanted to send a message to Klopp’s side ahead of their title defence next season, racing into a 3-0 half-time lead.

Kevin De Bruyne opened the scoring for Pep Guardiola’s side from the penalty spot after Raheem Sterling had been hauled down by Joe Gomez. The Belgian has now been involved in 30 goals in his last 31 Premier League appearances, consisting of 12 goals and 18 assists.

Sterling then got on the scoresheet himself from Phil Foden’s pass, his first Premier League goal against his former club in his ninth appearance against them. England Under-21 international Foden then made it 3-0 to City shortly before the break with a fine finish from De Bruyne’s pass.

It was a bruising 45 minutes for Liverpool and the first time they have been 3-0 down at the break since a 6-1 thrashing at Stoke on the final day of the 2014-15 season, in what was captain Steven Gerrard’s final game for the club.

Brendan Rodgers was Reds boss that day, though he would only be in the job for another four months, with Klopp succeeding the Northern Irishman in October 2015.

It is testament to the progress made under the German that Liverpool have rarely come close to suffering a similar result since.

The Champions League, Premier League, Super Cup and Club World Cup trophies have all been secured over the past two years, with Klopp signalling his determination to build a trophy-laden dynasty at Anfield.

Their horror first half at the Etihad matters little in the context of this season, but suggests Liverpool will face a real fight if they are to hold off City make it back-to-back titles next campaign.