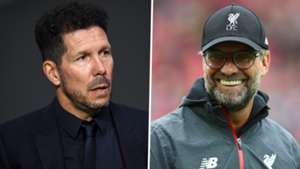 Liverpool have enough talent within their ranks to knock Atletico Madrid out of the Champions League, according to Luis Garcia, who thinks the Anfield crowd will have a huge part to play in the second-leg clash.

An early Saul Niguez goal at Wanda Metropolitano was enough to give Atletico a slender 1-0 advantage to defend when they head to Merseyside on Wednesday.

The Reds struggled to carve out clear-cut chances against Diego Simeone's men in the first leg, but history suggests they are capable of producing a much-improved attacking display in front of their own fans.

Liverpool overturned a 3-0 first-leg deficit by beating Barcelona 4-0 at Anfield in last season's semi-finals and went on the win the competition after overcoming Tottenham in an all-English showpiece.

Jurgen Klopp will have to mastermind another famous comeback if his side are to remain on course for a third successive final appearance, and Luis Garcia is "positive" Liverpool "have the power and quality to overcome the situation".

The 41-year-old, who played for both clubs over the course of his career, believes Atletico are capable of stifling the Reds again given Simeone's tactical nous, but he is leaning towards a home victory in the midweek encounter.

"[I think it will be] tough for both sides, to be honest," the former Spain international told Liverpool's official website.

"Here in Spain and in Madrid the feeling is a little bit the same - they know Anfield is a tough stadium and not many teams get out alive, the crowd always helps the home team. [But] actually, they know Simeone knows how to deal with these kinds of situations.

"After what we saw in the Metropolitano, where they were working the way they normally do - defending very well, waiting for the chance and the fast transitions and counterattacks they do so well - they still think they can make it.

"And then the other way around, knowing Liverpool and after being there many times in many situations where Liverpool needed to score goals and managed it, they know what Anfield can be if they need to score one, two or three goals.

"I'm quite positive, to be honest. I think Liverpool have the power, quality and talent to overcome the situation and go through to the next round."

After their latest European outing, Liverpool will switch their attention back to the Premier League, with a Merseyside derby meeting with Everton at Goodison Park scheduled for next Monday.