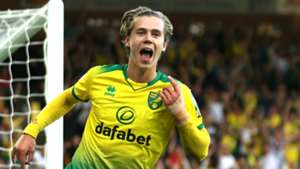 Liverpool and Manchester United have been offered hope in their reported pursuits of Todd Cantwell and Ben Godfrey, with Norwich legend David Phillips expecting sales to be sanctioned at Carrow Road.

The Canaries have assembled a squad littered with highly-rated young talent.

Stepping up into the Premier League has proved difficult for Daniel Farke's side as a collective, but plenty of hot prospects have proved their worth among English football's elite.

Commanding centre-half Godfrey has enjoyed a meteoric rise to prominence since been snapped up from York and is still only 22 years of age.

He is said to have registered on the recruitment radar of those at Old Trafford, with club colleague Cantwell a supposed target for the Red Devils' arch-rivals at Anfield.

The 22-year-old midfielder has hit six goals this season, enhancing his reputation, while the likes of Max Aarons, Jamal Lewis and Emi Buendia are also attracting admiring glances from afar.

Phillips admits that Norwich are going to find it hard to retain the services of prized assets, with offers expected to be tabled in the next transfer window.

He has told the Pink'Un: "You have got to be very careful whenever you're thinking of moving clubs.

"There are five or six players at Norwich that are very much going to be in demand. Daniel will want to keep hold of all of them I'm sure but will know that if someone offers a lot of money then some will leave.

"Ultimately it will come down to what clubs come in for them and how much they are offering. But the players would be wise to look at someone like James Maddison. He left Norwich when he was 21 and you could see he was ready for it."

While the Canaries are braced for bids in their current crop of talent, they are also continuing to build for the future.

Sam McCallum was snapped up from Coventry in January, with the 19-year-old defender another of those being tipped for the top.

Phillips is a big fan, having spent time coaching in the Sky Blues' academy system, and added on a player who was loaned back to Mark Robins' side after agreeing a switch to Norfolk: "Norwich do things the right way and they are already investing in the future - they have got a really excellent player in Sam McCallum.

"That shows to me that if someone like Jamal was to move on, then Sam is instantly ready to come in and do a very good job for them.

"He is a very talented boy and the latest to come out of a system at Coventry that's produced players like Maddison and Callum Wilson in recent years."