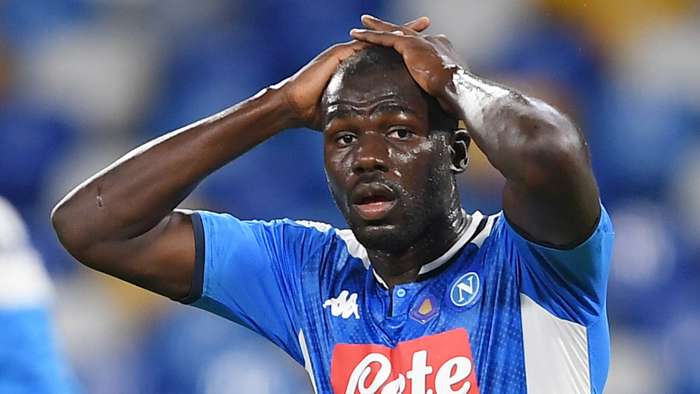 Rumoured Liverpool and Manchester City target Kalidou Koulibaly has played down rumours of a summer move away from Napoli.

The 29-year-old has racked up 239 appearances for the club in all competitions, including 27 this season, emerging as one of the top centre-backs in Europe in the process.

The Senegal international has been tipped to undertake a new challenge away from Naples this summer, withBarcelona andParis Saint-Germain among those beingcredited with an interest in his services.

Liverpool and City have also been strongly linked with Koulibaly, who still has three years left to run on his current contract at Napoli.

The highly-rated defender has now come out to address ongoing speculation over his future, revealingthat he has yet to sit down with the top officials at Stadio San Paolo to discuss a potential transfer.

Koulibaly also admitted that he would be open to seeing outhis playing days at the Serie A club, tellingGazzetta dello Sport: "In football, you never know what happens.I never spoke to Napoli about leaving.If we have to find a solution, we will find it, but I have never talked about the transfer market.

"I also read in the newspapers about my future.But I only want to think about playing, I am 100 per cent committed toNapoli and it bothers me to be linked, every day, to this or that European club.

"We will see what the president (Aurelio De Laurentiis) will decide andif he proposes toextend my contract, thatwould allow me to end my career here.

"At the moment, I still have a three-year contract and I am not thinking of anything else but Napoli."

Pressed further on the possibility of retiring at Napoli, Koulibaly responded: "I wouldn't say no.But I don't want to deceive anyone.We know how things are in football.Maybe you say you stay for life and then you are sold.

"So I tell the fans that I will give 200-300 per cent while I wear this shirt.I have a special relationship with the people of Naples, a pure feeling."