'Like Hamilton winning Formula Two!' - Mourinho admits to a lack of love for Europa League

'Like Hamilton winning Formula Two!' - Mourinho admits to a lack of love for Europa League 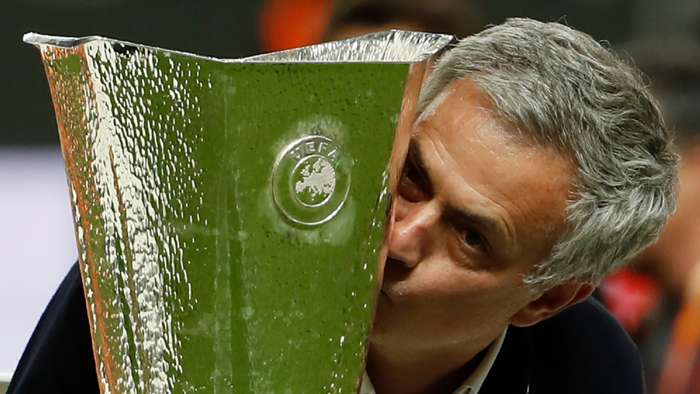 Jose Mourinho wants to lead Tottenham into the Europa League, but compared playing in the competition to Lewis Hamilton winning Formula Two.

Mourinho is eager to qualify for the Europa League, even though the Spurs head coach compared it to Formula One world champion Hamilton racing at a lower level.

"The Europa League is not the biggest competition in Europe," he told a news conference.

"But it's the second and when a club wins the Champions League or when a player wins it or a manager does, well, if you ask Lewis Hamilton if he wants to win Formula Two or 3000 or whatever you call it, I don't think it will be a great deal for him.

"But it's a competition and I prefer to play Europa League than not to. I think it's a title Tottenham would like to get. Of course at Manchester United, it's a club with a dimension that thinks about the Champions League, but we played in the Europa League and we won it.

"I think we should do everything to play in the Europa League next season and we should fight for that."

Mourinho led United to the Europa League title in 2017, 14 years after winning the UEFA Cup with Porto.

With a decision over Manchester City's European ban set to be made on Monday, Spurs sit three points behind sixth-placed Wolves and two adrift of Sheffield United with three games remaining.

Mourinho believes he could have led Tottenham to a top-four finish if he had been in charge for the entire season, having replaced Mauricio Pochettino in November last year.

"I know that I could even look to the situation in a selfish point of view and say since I arrived if the championship arrived in that moment there, even with all of the problems after that, I think wewould be fourth or fifth," he said.

"I don't want to be selfish and only look at it as a fan, hypothetically, not yet, finishing above Arsenal.I would love to play in the Europa League. It's not a competition that I'm in love with or like very, very much to play, but when you cannot play Champions League, you play Europa League.