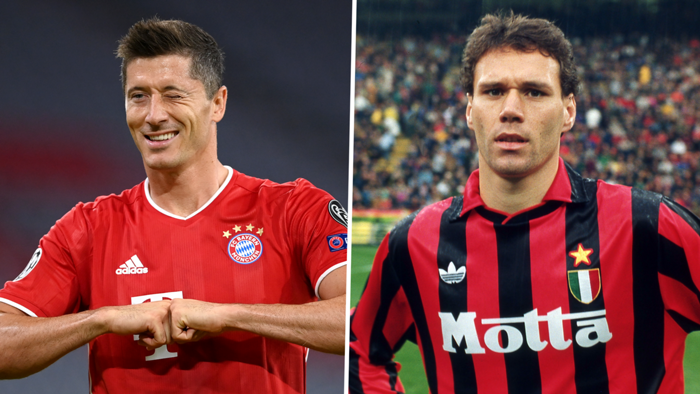 Lewandowski has scored 53 goals in all competitions so far this season for Bayern, with13 of those coming in theChampions League. That tally marks a career-best return for the 31-year-old, who continues to improve with age.

The striker's form ledGary Lineker to say on BT Sport prior to Friday's Champions League quarter-final between Bayern and Barcelona:"Bayern probably have the best player in the world right now."

The ex-Manchester United defender concurred before comparingLewandowski to the legendary Dutch forward.

"Yeah, Lewandowski, in terms of what he's done this year in terms of just goals alone, let alone his performances," Ferdinand said.

"He had a hand in every goal in the last round against Chelsea. He's not just an out-and-out goalscorer. He scores the goals as you'd expect from a No. 9, he can come over the back post, he scores the little deft touches, brings other people into the game. As a No. 9, he's probably the closest I've seen to Marco van Basten."

Van Basten won theBallon d'Or on three occasions:in 1988,1989 and again in 1992. Lewandowski would have been one of the favourites for the 2020 award, but FranceFootball announced last month that they wouldn't be handing out the award this yeardue to the “lack of sufficient fair conditions” as a result of the coronavirus pandemic.

That led Ferdinand to joke that Lewandowski should start up a petition to ensurethe award is given out this season.

"If I’m Lewandowski and they have cancelled the Ballon d’Or, I’m starting up a petition to get it back on,"Ferdinand toldTEAMtalk.

"Aside from the year when Luka Modric won it, Messi and Ronaldo have dominated that award for the last 12 years and Lewandowski has taken himself to the next level this season.

Tottenham's second Premier League game of the season in the early kick-off on...