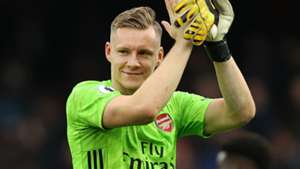 Bernd Leno says Arsenal's 1-0 win against West Ham was a clear example of the new mentality Mikel Arteta has instilled in the team.

The Gunners were far from their best against the Hammers on Saturday and had to ride their luck at times before snatching a late winner through substitute Alexandre Lacazette.

It was a goal that secured a third successive victory in the Premier League and it kept alive their hopes of mounting a late challenge for the Champions League places.

Leno was crucial in the win, making several fine stops as the Gunners dug deep, and the German keeper says the way Arsenal ground out the win when not at their best was an indicator of the improvement they are showing under Arteta.

"Yes, I think you could see many games like this," Leno said, when asked if there has been a change of mentality at the club.

"Also Chelsea away, 2-2, it was only a mentality game with the red card and yes, I think we are happy about our mentality.

"But I think the manager also said that everything was not perfect. We have to work on many things and improve many things.

Saturday's victory in the London derby made it two wins from two for Arsenal following their morale-sapping exit from the Europa League at the hands of Olympiacos.

The manner of the exit from Europe, which saw the Greek side snatch a winner in the last minute of extra-time, left Arteta's squad crestfallen - but they have responded well with a hard fought success at Portsmouth in the FA Cup and the weekend win over West Ham.

"It was a very disappointing day for us," Leno admitted, looking back on the defeat by Olympiacos. "When you score in extra time and then you concede in the last minute it is always disappointing.

"Nobody could sleep very well after this disappointing night. But as a football player you have to look forward. Sometimes it's very difficult, it was very difficult. But football can change so quick.

"We are out of this competition, we have to finish with the Europa League. We have to look forward and this was the mindset from the manager.

"And I think the manager he did a very good job to get us up again and you saw the answer against Portsmouth and now again [against West Ham]. So you can see this team is alive and has a very good mentality."

Arsenal now turn their attention to a trip to Manchester City on Wednesday night as they look to secure a fourth successive win in the league.

Victory at the Etihad would move Arteta's side to within two points of fifth-placed Manchester United and with a top five finish potentially enough for Champions League football next season due to City's impending European ban, Arsenal's dream of returning to Europe's premier club competition for the 2020/21 campaign is still very much alive.

And Leno says for Arsenal to get the points they need, they most focus solely on the themselves, rather than worry on those around them.

"I think it's all about us, if it will be realistic or not," the German international said. "There is still a gap but I think we have ten games left so we have enough opportunities to reduce this gap and go to the Champions League place.

"Maybe fifth is enough, I don't know, it depends on Manchester City. But I think it's all in our hands."