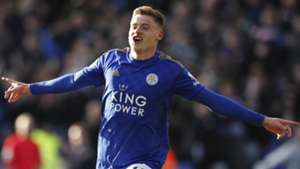 Leicester City will be out to close the gap on second-placed Manchester City when they welcome Aston Villa to the King Power Stadium on Monday night.

City's 2-0 defeat at rivals Manchester United on Sunday means the Foxes can cut the deficit to just four points with a win, whilst also putting themselves eight points clear of fifth.

At the other end of the table, Villa have just 11 games left to secure enough points for another season in the Premier League and victory on Monday would see them move out of the relegation zone.

With the two sides at the opposite ends of the table, it is little surprise to see bet365 make Leicester 4/9 (1.44) favourites to complete the double over Dean Smith's men.

Villa beat the Foxes in the Carabao Cup semi-finals in January and are 11/2 (6.50) to repeat the feat with victory at the King Power Stadium.

The first leg of that semi-final finished 1-1 and another stalemate can be backed at 19/5 (4.80) with the online bookmaker.

Jamie Vardy should be fit enough to return for the first time in two weeks, whilst Ben Chilwell looks to set shake off injury in time for this one.

Villa will be without John McGinn, who is recovering from an ankle problem and joins Tom Heaton, Wesley and Jed Steer on the sidelines.

A return to the Champions League for Leicester looked inevitable just a few games ago but just three wins in their last 12 Premier League games has seen them get dragged into the top-four battle.

Brendan Rodgers' men have especially been struggling since the turn of the year, losing four of their eight fixtures in 2020 whilst failing to score in their last three.

However, the prospect of facing Aston Villa's defence - which has leaked 18 goals in their last eight league games - will surely give the Foxes plenty of hope they can at least arrest their scoreless run.

Despite Villa's poor defensive record, they have scored in six of their last seven top-flight games and so the Asian Goal Line of 3.0 at 87/100 (1.870) looks the best bet for this Monday night fixture.

This selection will pay out if there are more than three goals in the match whilst punters will receive their stake back if there is exactly three strikes.