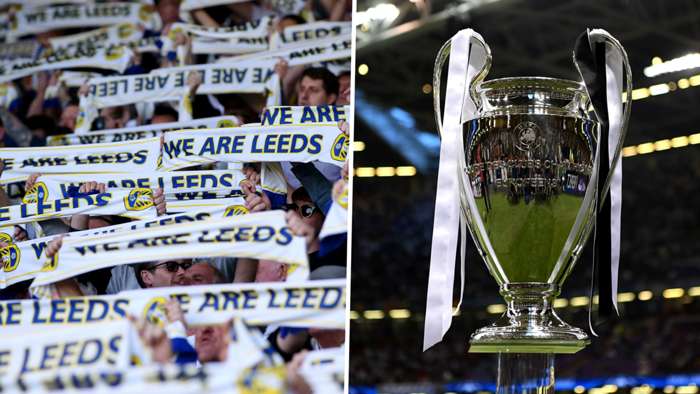 You'll have noticed that one of the most popular Leeds chants is one in which the supportersproclaim their status as European champions – when in reality,the club have never before lifted the top continental prize.

Leeds supporters sing champions of Europebecause they feel as if they are the deserved and rightful winners of the 1975 European Cup final, which they lost to Bayern Munich at the Parc des Princes in Paris.

The German side were 2-0 winners on the day, but the 1975 final has been shrouded in controversy due to several infamous refereeing decisions that worked against Leeds' favour – with Leeds fans believingthat they were robbed of the trophy.

Leeds had dominated the game but were unable to put their chances to bed, coming deliriously close on several occasions, outplaying their German counterparts in the first halfand even having a goal disallowed - with referee Michel Kitabdjian denying the West Yorkshire side a penalty twice.

The first penalty shout came in the 23rd minute when BayernMunich skipperFranz Beckenbauer clearly came into contact with the ball on his left arm inside his own penalty area, and the second arriving 10 minutes later whenBeckenbauer trippedAllan Clarke inside the box.

Leeds came close to scoring early in the first half, with Billy Bremner being denied a goal from five metres out by a reflex save from goalkeeper Sepp Maier.

Peter Lorimer scored a goal that was disallowed a minute later, after Bremner was deemed to have beenin a tight offside position within the box.

Controversially, the referee had initially pointed to the centre circle (which signifies a goal being scored), but Beckenbauer insisted for him to confer with the linesman - who had not originally raised his flag for offside.

After this consultation, the referee deemed that Bremner was offside - causing Leeds fans to protest and riot in anger.

Despite having been on the back foot for over two-thirds of the match, Bayern scored in the 71st minute following a counter-attack spell.

Leeds fans were angered by the result and the seemingly biased refereeing, with the final minutes of the match and Bayern's lap of honour interrupted by them hurling seats onto the pitch.

The violence reached a boiling point in the streets of Paris later that evening when the visiting English supporters brawled with the police, with Leeds then handed a three-year European ban (which was never upheld due to Leeds' failure to qualify for Europe until 1979-80).

Former Leeds manager Jimmy Armfield has said that he believed his team were robbed of the final.

“I’ve always felt we were robbed,” he said.“What should have been a great day wasn’t a great day in the end.”

“That final against Bayern Munich must go down as the most one-sided in the history of the European Cup,” former player Clarke has stated.

“How a team who played like we did could end up as the losing side I’ll never know. Well, I do. We were cheated out of it.

“In my mind we were champions of Europe that night.

“I love that our fans sing about us being champions of Europe because it reminds everyone what really went on.”

"He was very suspicious," Bremner saidof the French referee, although he lateradmitted Leeds did not play as well as he had hoped.