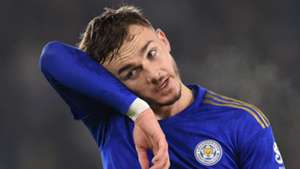 Maddison and the Foxes have had an uneven start to 2020 after getting out of the blocks quickly when the season started. They're still in third place in the table, two points clear of fourth placed Chelsea.

They face 18th placed Aston Villa on Monday and Maddison will be in an intriguing personal duel with Jack Grealish, a rival for a spot in Gareth Southgate's England squad for the European Championships in the summer.

Rodgers thinks that Maddison's dip in form was inevitable, and sees his return to peak performance the same way.

"I think he's still one of the most creative players for us," the ex-Celtic boss told the press,

"He's played at a really high level for most of this season.

"He's been 8 or 9 out of 10 virtually every game. If he's dipped below that, it's what happens sometimes.

"I'm not worried about him, he's still a fantastic player for us. He's assisted goals and he's scored himself."

With a return to the Champions League seemingly on the cards, and a fatigued squad succumbing to injury Rodgers knows Leicester must retool this summer.

While plans are in place to improve the playing squad. the Northern Irishman says the current crop cannot lose focus.

He added: "Hopefully by the end of the season, that will be the case. Each year you want to improve.

"There's no doubt that's what our aim would be. We're working virtually with a similar squad, by the end of the season, for near on 18 months, so you need to refresh it, you need to keep looking to raise the bar.

"That sort of plan is under way. I think the key now is to finish the job and give everything to get to where we want to at the end of the season, and then we can look at that."

Leicester's next three league games are all against teams in 15th place or below. After Villa, they face Watford and Brighton.