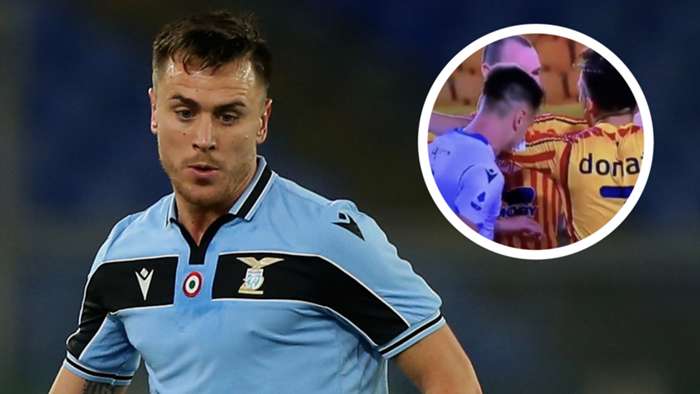 Lazio's Serie A title challenge is all but over after they lost 2-1 to relegation threatened Lecce on Tuesday night, with the added embarrassment of one of their players being sent off for biting an opponent.

Patric, right-back for Lazio, was given his marching orders in the 93rd minute after he was captured by VAR clearly chomping down on the arm of Lecce's Giulio Donati.

The incident occurred as Lecce prepared to defend a late free kick as they sought a crucial three points in their battle against relegation to Serie B.

As Donati stretched out his arm to organise team-mates, Patric is clearly captured in the video replay leaning in unprovoked and biting the player just above his elbow.

After reviewing the footage, the referee gave the 27-year-old Spanish defender a straight red card, before Lecce held on for victory.

Lazio, who were closest challengers to perennial championsJuventus for a first Serie A title since 2000 before Italian football was shut down for three months because of the coronavirus pandemic, are now all but out of the race having suffered a slump in form upon the resumption of play.

They are seven points behind Juve with as many games to go, although they were helped on Tuesday night by the Turin side suffering a surprise 4-2 loss to AC Milan, who came from two goals behind with four strikes in the space of 18 minutes.

They have lost three of their five league games since the Italian top flight restarted, being beaten by fellow championship chasers Atalanta in the first game back before being well beaten 3-0 at home by Milan last Saturday.

Lecce meanwhile climb out of the Serie A bottom three with victory and have 27 points from 31 games, although Genoa - the team they leapfrogged and of who they now sit a point ahead - have a game in hand.