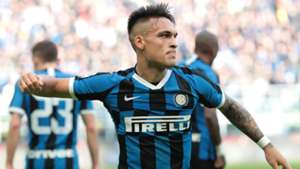 Lautaro Martinez should forget a summer move and concentrate instead on being successful with Inter, former Nerazzurri midfielder Wesley Sneijder has said.

The 22-year-old Argentine has been closely linked with a summer move to Barcelona, where Lionel Messi is reportedly a strong advocate for his arrival.

But Sneijder, who turned out for Ajax, Real Madrid, Galatasaray, Nice and Al-Gharafa during a 17-year playing career, says that the time remains too soon for a young forward who has scored 12 times and set up three more in 22 Serie A outings this season.

"I believe very strongly that he must remain in Italy," he told Di Marzio. "He has the potential to become one of the best, but first he needs to win something with Inter.

"There's a moment to do anything. He could play for Barcelona, but if he really wanted to leave I'd prefer that he moved to Real!"

Meanwhile, he passed comment on Christian Eriksen, who arrived in Italy from Tottenham during the January transfer window but managed to feature in only four Serie A matches before the coronavirus pandemic forced the suspension of play.

"Antonio Conte has a big squad and with Eriksen in the squad he can finally make the leap to become real challengers," he said. "Christian did well at Ajax, then at Tottenham and now he has to establish himself in Italy. He has a lot of quality. With his characteristics, he can easily become one of the leaders of the new group."

The ex-Netherlands international was also pressed on former team-mate Mario Balotelli, who is in dispute with Brescia - the latest chapter of a controversy-riddled career.

"He is very strong, there's nothing else to say," Sneijder said on a player who has reportedly had his contract cancelled by the Serie A outfit. "He could have been among the best attackers in the world but he made certain choices. I don't agree with them, but the world is beautiful because everyone is made in his own way."

"Is Brescia his last chance? I don't know - someone like him can always make a difference."

Sneijder is now an agent and has recently released his own range of wines.