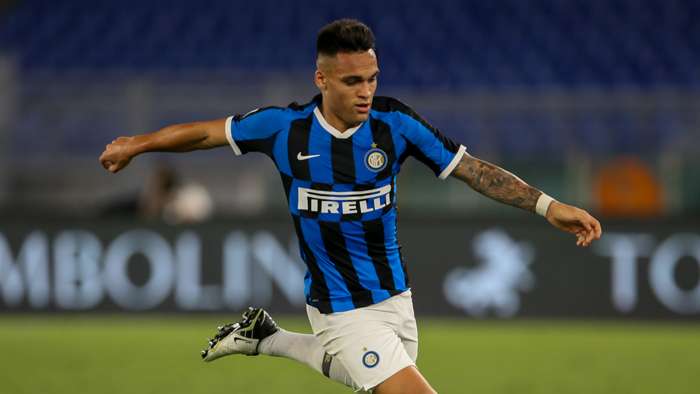 Lautaro Martinez has vowed to continue "giving 110 per cent" for Inter and repay the confidence shown in him by Antonio Conte as speculation over a move to Barcelona gathers pace.

Inter chief executive Giuseppe Marotta has stressed the star player is not for sale, with the forward's €110million (£100m/€130m) release clause expiring earlier this month, and Martinez, who has formed an impressive partnership with Romelu Lukaku this season, has insisted he will give his all for the club as long as he remains an Inter player.

"I am a boy who always fights - for my goals, for those of the team, for the happiness of the fans," he said in Inter's matchday programme ahead of Wednesday's clash with Fiorentina. "I always try to give 110 per cent for this club, for all the people who love it, for the Inter shirt."

Martinez scored 16 goals in all competitions prior to the campaign being halted in March by the coronavirus pandemic but has netted only twice in 10 games since last month's restart.

Conte has repeatedly defended Martinez's form and the 22-year-old is grateful to have the full support of his head coach.

"Conte has given me confidence," he said. "That is a very important and fundamental thing, because he worked on the mentality of each of us. I really appreciate it, every day he makes us grow."

Nothing definite has occurred regarding Lautaro moving from Inter to Barcelona despite months of speculation, although several prominent figures connected to the player have already expressed their opinions that he would be an excellent fit at Camp Nou.

Fabio Radaelli was in interim charge of Racing Club when he signed Lautaro in January 2014, snapping up a raw diamond from Bahia Blanca outfit Liniers.

He told Goal in April: “InArgentina, we feel devotion to Leo Messi because he can make everyone play better. Lautaro can grow a lot with him – also because he would have competition with Luis Suarez.