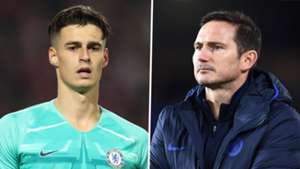 Chelsea boss Frank Lampard needs to end his "grudge" with Kepa Arrizabalaga and put any "beef" to one side for the good of a collective top-four bid, says Craig Burley.

The Blues suffered another wobble on Saturday as they were held to a 2-2 draw away at Bournemouth.

They remain in fourth spot for now, but the chasing pack have closed to within three points.

Defensive leaks have sprung at the worst possible time, with Lampard having taken to tweaking his options at the back.

Kepa, despite being the world's most expensive goalkeeper at ?71 million ($91m), has been dropped amid talk of an internal dispute at Stamford Bridge.

Questions are being asked of his future, with Willy Caballero having started Chelsea's last five matches, but Burley believes Lampard needs to bury the hatchet with a Spanish shot-stopper.

The former Blues midfielder told ESPN FC: "The worrying thing is he [Lampard] is continuing his - I would say 'in-fight' is the wrong word, but 'beef' with Kepa, with Willy Caballero starting again.

"We know you don't fancy him but he's a better goalkeeper and the chasing pack are coming.

"We need Champions League football next year, and are we on a 'grudge' thing here with Kepa or do you really think Willy Caballero is the better option?

"I don't think many would really put that up as an argument."

Burley added, with Chelsea having gone eight games in all competitions without a clean sheet: "I'm not suggesting Kepa's been in the greatest form, because he hasn't.

"But Willy Caballero is a back-up goalkeeper now, or a cup goalkeeper for them. Clearly there's some discord here between the record-signing goalkeeper and the manager.

"From a personal issue, it is vital they get this knocked off because with Manchester United picking up, with Wolves hanging around, there is no guarantee at this moment in time that Chelsea will make that top four."

Chelsea have an FA Cup fifth-round clash with Liverpool to take in on Tuesday before then playing host to the Reds' Merseyside rivals Everton in the Premier League on Sunday.