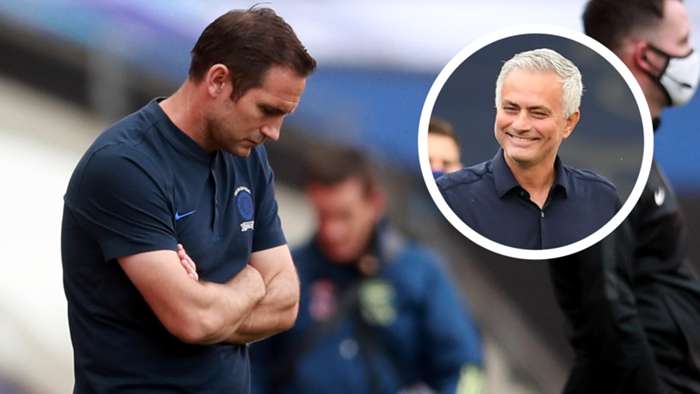 Jose Mourinho taught Frank Lampard a lot of things during his time as manager at Stamford Bridge.

The likes of Lampard, John Terry and Didier Drogba helped -under Mourinho's tutelage -turnthe Blues from also-rans into frontrunners.

For a time under the Portuguese they were a winning machine.

Fast-forward to the end of Lampard's first season in the managerial hot seat at Stamford Bridge, and he could only watch on from the sidelines as Arsenal lifted the FA Cup at Wembley on Saturday.

Two goals from Pierre-Emerick Aubameyang proved enough for the Gunners to claim the trophy for a record 14th time as they responded well to Christian Pulisic's early strike under the arch.

Chelsea were, of course, more than a little unlucky. Inside 50 minutes they had lost both Cesar Azpilicueta and Pulisic to hamstring injuries while Anthony Taylor's erroneous decision to send off Mateo Kovacic left the Blues short-handed as they aimedto launch a comeback of their own late on.

But Lampard knew that his team had let this one slip. They had controlled the game in the aftermath of Pulisic's opener, but gradually Arsenal fought their way back into proceedingsbefore claiming what, in the end, was a deserved win.

"We had a great start, control of the game and at that point we started to get sloppy," Lampard told reporters after the match. "We were not taking control and ramming it home by keeping doing the right things, moving the ball as we were and winning it back so quickly.

"We got sloppy and slower in our game, and it was hard to change the tempo after that.There were certain circumstances which conspired against us, for no bad reason. In terms of football, we didn’t play well enough.”

Lampard has done a lot of good during his first year in charge at Chelsea. Having lost star man Eden Hazard and unable to sign a replacement, he has navigated a season like no other well.

His young, increasingly homegrown team have secured Champions League football for next season and reached a cup final, but now they must take the next step, They must learn to become that winning machine of Mourinho's tenure.

There are very few players in the Chelsea squad with more than a couple of trophies to their names, and those who do look set to be on their way out.

Pedro has won all there is to win in the game, but hewill head to Roma after his final appearance in a blue shirt ended with him being stretchered off with a dislocated shoulder.

Willian, who missed the final through injury, is set to follow him unless an 11th-hour deal can be reached over a new contract.

Experienced campaigners Olivier Giroud and Marcos Alonso, too, have suitors should Lampard look to totally freshen up his squad

Their replacements, while exciting, do not have that same experience of regularly lifting silverware.

Hakim Ziyech has tasted success in the Netherlands, but doing so in far more competitive Premier League is a different matter. Timo Werner and Kai Havertz, meanwhile, are star men at two of German football's nearly teams, who for all their strengths, tend not to get the job done over the course of a campaign or in finals.

And so, as Lampard reflects on his first season at the helm, he can do so knowing his team aremoving in the right direction. In truth, they look better equipped than Arsenal to compete for future honours right now.

But in the Premier League at this moment, there are two winning machines, while in Europe there will be plenty more waiting for them in the Champions League.