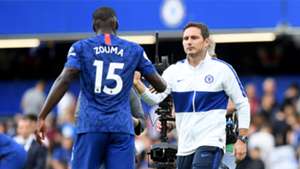 Chelsea defender Kurt Zouma says manager Frank Lampard deserves all the credit for his tactical decisions in the win against Tottenham Hotspur and possesses the players to operate in different systems.

The centre-back played a key role as the Chelsea boss reverted to a back three for the 2-0 win in north London on Sunday, when a Willian double saw Lampard overcome his former manager Jose Mourinho.

Zouma lined up alongside Antonio Rudiger and Fikayo Tomori as the Blues kept their first away clean sheet in the league this season, and he believes his manager deserves huge credit for making the switch.

"The manager just wants us to show personality on the pitch, with the ball and without the ball as well," Zouma told Chelsea's official website.

"He just wants us to talk together a lot and also when we get the ball just play and that means taking risks at times. Not crazy risks but being in position and try to do a bit more sometimes to help the team and to get the win.

"We hadn't been playing three at the back for a long time now, maybe one or two months, and coming back to that and playing like that, for sure the manager deserves the credit because he did it well and everybody respected the plan.

"We have all different kinds of players and playing four at the back or three at the back, for us both of them are good formations. We have very talented players who can play in different positions no problem."

It was the club's first win without conceding away from home since December last year, but Zouma's attentions have now turned to Boxing Day's home fixture against Southampton, who have three wins in their last five matches.

He added: "Boxing Day is not special because every three days we have a game, and we know that after Christmas people will be celebrating a little bit maybe with their families but it is an important game for us.

"Especially at home we want to win this one and especially we want to confirm the victory we had at Tottenham, so we want to keep going and get another streak of wins.

"We have to play the same as we did against Tottenham. It does not matter who the opponent is. Just fight for every ball, be as a team, be compact and defend well, and try to score the chances we get. That is it."