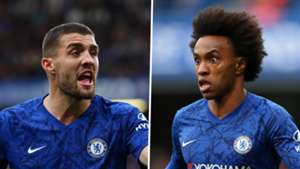 Frank Lampard says Willian and Mateo Kovacic both suffered Achilles injuries in Chelsea's 2-0 FA Cup win over Liverpool on Tuesday, after both players limped out of the game.

Willian, who scored the first goal of the evening after Adrian spilled his shot from range, went down off the ball less than five minutes into the second half.

Kovacic had already gone off before the interval. He appeared to be tripped slightly by Reds youngster Neco Williams, before his foot was stood on by Sadio Mane as the Liverpool pair attempted to win the ball from him.

The 25-year-old initially carried on, but went down again moments later and had to be helped from the pitch. He was replaced by Mason Mount.

"Both have got an Achilles issue," Lampard confirmed after the game.

"Willian hopefully is not too bad, that is what he is reporting there so we will see how he is tomorrow. Kovacic's feels slightly worse. Hopefully not too drastic, so we'll see."

Lampard's side have Premier League fixtures with Everton, Aston Villa and Manchester City coming up in the next few weeks, as well as the second leg of their Champions League last-16 tie with Bayern Munich.

If Kovacic is ruled out of any of those games, his absence will be keenly felt in the Chelsea midfield.

The former Real Madrid, Inter and Dinamo Zagreb man has been in fine form this season after enduring a frustrating first campaign at Stamford Bridge.

Signed under Maurizio Sarri, he failed to make an impression in his first year at the club but has looked a different player for much of this season. He has missed just four games in all competitions, two of which came through a yellow card suspension.

Willian, too, has been an important player for Lampard this season, and hasn't missed a Premier League game since the opening day of the campaign.

His goal was his sixth of the season in all competitions, with five assists to his name as well.

With his contract up in the summer, he is widely expected to leave the club. Barcelona have been linked, though Willian himself has spoken of his and his family's happiness in London and his desire to say.