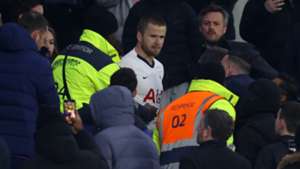 Chelsea boss Frank Lampard feels players deserve more credit for not reacting to hateful comments coming from the crowd after Tottenham's Eric Dier was involved in an altercation during his side's FA Cup defeat to Norwich.

The FA and Spurs are investigating after Dier confronted a supporter in the Tottenham Hotspur stadium stands, who was involved in a row with his brother - with the England international likely to face a ban.

Lampard admits he faced similar abuse as a player and thinks that it isn't easy for players to keep their emotions in check.

"I thought it was a pretty natural reaction from Eric Dier, I think you if you asked the man or woman in the street, if one of your family members needed protection, your natural reaction would be to go there," Lampard told reporters at Cobham Training Centre.

"Because we are in the sport that we are in, I thought Jose Mourinho said it pretty well afterwards, you are not supposed to, not allowed to as such, but when you talk about natural reactions, I understand it, particularly with a family member.

"I didn't see anything go beyond slightly heated, which is good thing, so we will see how it is dealt with, but I think it should be understood that if Dier saw his brother in a situation, then I understand his thought process.

"I think its what it was, I took some abuse over the years, I have seen teammates take abuse, I know some of my family members and friends that have been in earshot of abuse, so I don't think it has changed.

"I think players should be given a lot of credit sometimes that they hold themselves in certain moments, I think they could be. We talk about certain types of hate in the game, and we analyse them, and then other types of hate seemingly are ok to say something to you or about your family.

"I have heard all of that and sometimes you don't pick up on it and its all ok because of the pantomime nature of football. You walk into the stadium, and you don' live by the same rules you would Iive by in the street.

"I think that has not changes, maybe social media has made it worse around, day to day, minute to minute, off the pitch, some people sit and watch a game at home and spend 89 mins of the 90 tweeting, or posting their thoughts on the game rather than watching it. It is unfortunate."

Chelsea go into their league match with Everton this weekend following a morale-boosting 2-0 win over Liverpool in the FA Cup.

Kepa Arrizabalaga returned to the starting line up after missing the last five matches due to poor form. Lampard admits he has a decision to make in goal after using Willy Caballero in recent weeks.

"Yeah, it's given me thoughts. He did very well, it's exactly what I wanted from him and I understand that that's not easy because everyone looks to the goalkeeper more than an outfield player," Lampard said.

"All eyes are on and I've mentioned in the weeks before that he's been professional in how he's handled it when has been out of the team. He came in and did exactly what I want so he's given me good thinking."