Lampard: No timeframe on Pulisic or Abraham's recovery for Chelsea 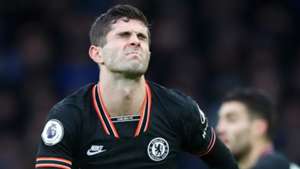 Frank Lampard has revealed that Chelsea's selection problems look set to continue indefinitely with Christian Pulisic and Tammy Abraham's return dates unclear, and Jorginho due to serve a suspension.

Pulisic has not completed a first-team training session in the last two months and he hasn't played since New Year's Day, while Abraham has gone to Barcelona to see a specialist about his ongoing ankle pain.

Jorginho picked up his 10th yellow card in the Premier League this season in the 2-2 draw at Bournemouth on Saturday and, having also been booked in the Champions League defeat by Bayern Munich, he will miss three of Chelsea's next four games.

Ruben Loftus-Cheek, meanwhile, is due to play for the Under-23s against Everton on Monday to build up his match fitness as the Blues prepare for an FA Cup tie at home to Liverpool on Tuesday.

N'Golo Kante remains out for a few weeks and Callum Hudson-Odoi will miss the upcoming game against Liverpool, leaving Lampard with a host of issues in picking his upcoming teams.

"I am hoping [Callum] will be fit for next Sunday," Lampard said at Bournemouth. "Christian is the same as Tammy; there is no clear answer. [Tammy] went to Barcelona, to have a look at his ankle for some more advice on it.

"We will have to work around [Jorginho's suspensions in the league and Champions League], we have players who can play there. Kovacic finished in the holding role, Ross Barkley, Mason Mount, Billy Gilmour, there are solutions and there might be opportunities for other players.

"It wouldn't be fair on him to bring him on for 15 minutes and it probably wouldn't be the right thing for the team at the moment. Once he shows he can go through a game, he will probably be back in."

Lampard has looked to play without natural wingers since a hamstring injury suffered by Hudson-Odoi in training, which added to the loss of Pulisic.

Much had been hoped from the duo this season after Pulisic joined Chelsea from Borussia Dortmund for ?58 million and Hudson-Odoi signed a lucrative new contract, and Lampard concedes he could have done with those players in a run that has seen them win just one of the last four games.

"We miss them of course because of what they bring and they can go by people," he added. "They can travel well with or without the ball. They are two big players who we have missed, particularly Christian for quite a while now."

The FA Cup provides Chelsea with their last realistic shot of silverware this season and they will a face Liverpool side who lost their first league game of the season at Watford on Saturday.

Liverpool will be favourites for the match and Lampard acknowledged he is not in a position to make wholesale changes as he tries to juggle the challenge of trying to win a trophy and claim a place in the Premier League's top four.

"It's Liverpool," he concluded. "Our fans want us to overturn the best team in the land, it doesn't mean I don't change a couple of people, fresh legs or a couple of different options but I won't pick a team casually and be giving minutes.

"I will be treating it with the care I would give a Premier League game."