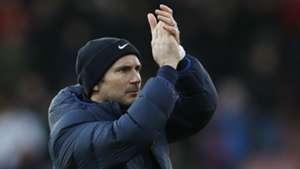 Frank Lampard admits his Chelsea side are not clinical enough at present, with a brace from left-back Marcos Alonso required to get them a point in a 2-2 draw with Bournemouth.

A lack of end product has been an issue for the Blues over recent weeks.

They dominated again at the Vitality Stadium on Saturday, seeing over 70 per cent of the ball and firing in 23 efforts on goal.

Only two of those hit the net, with Alonso rescuing a share of the spoils five minutes from time having earlier fired Chelsea in front.

Lampard concedes that more is required from his team in the final third if they are to cling on to a top-four standing in the Premier League.

He told BBC Sport when reflecting on stalemate with the Cherries: "We expected a fight and they gave us a difficult game but we should win the game, we had a lot of possession and chances.

"The character of the team was great, it wasn't for the want of trying but we need more goals.

"Marcos Alonso has had a big week but I don't want my left-back top of the scoring charts. I want our attackers scoring goals and they haven't.

"We wanted to win, we should have won but it's a difficult league. It's that cut throat part of the season. If we keep having games like this and we are not clinical it's tough.

"The way the season has panned out, we should be pleased that we are fourth but it means nothing at this stage. If we manage to get in the top four the achievement is huge but we are a long way from that yet."

Alonso, who was also on target in a 2-1 derby win over Tottenham, gave Chelsea the lead against Bournemouth after 33 minutes.

Lampard saw his side shoot themselves in the foot just before the hour mark, with Jefferson Lerma and Joshua King turning the match on its head with two goals in the space of 176 seconds.

"We should win, we had many chances," added Lampard, who suffered a humbling 3-0 Champions League defeat to Bayern Munich in midweek.

"We had a bad 10-minute spell where they scored and that I don't like. I'm pleased with the character to get a draw but we should win the game.

"Against Bayern we conceded twice in a short space of time, it's not the first time. Could it be a lack of concentration? Possibly from the players.

"People talk about the defence but if you are 1-0 up and leave teams in the game then one set piece can change the game. We should score more goals and then we don't have that problem."

Chelsea will be back in action on Tuesday when they play host to Liverpool in the fifth round of the FA Cup.