Lampard: Chelsea could model themselves on Liverpool to return to the top 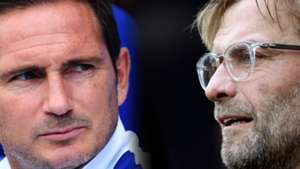 Frank Lampard thinks Chelsea could look to the model that has seen Liverpool get back to the top of English football and on course to end their 30-year wait to win a league title.

Jurgen Klopp has an almost decisive lead at the top of the Premier League table and takes his Liverpool side into an FA Cup fifth-round match away at Chelsea on Tuesday night.

The Reds finished eighth in Klopp's first season but they have gone on to become a dominant force in English and European football.

Meanwhile, Lampard's outfit haven't recorded back-to-back league victories since November and the manager admits Liverpool are an example for Chelsea in how to get back to the top.

"We've seen the Liverpool journey and it's an incredible story," Lampard told reporters. "I remember them linking and raising their arms when they drew 0-0 with West Brom.

"Probably slightly ridiculed for it at the time but it is now symbolic of the journey of this team that is now an absolute machine, rolling everyone over until the last game.

"So, it's a reference point in terms of when you see what a work in progress looks like. It can take time and behind a team that wins so many on the bounce is a lot of sweat and hard work from everyone involved, which is what I am trying to do here.

"As part of their journey, they have signed some fantastic players at the right times, ones that feel pivotal. Virgil van Dijk and Alisson, the keeper - they have a great knack of signing the right player at the right time that suits the way they want to play and keep moving forward.

"It's a great model in those terms but I don't want to look anywhere near like I'm comparing us now. I'm under no illusions but what I do understand is that behind their story is a lot of hard work they have been prepared to do."

Liverpool's 34-point gap over Chelsea means it is mathematically impossible for the Blues to win the league with 10 games left to play. That, coupled with a likely Champions League exit after a 3-0 home defeat to Bayern Munich, means the Blues' best hopes of winning silverware are in the FA Cup.

Only one previous manager has survived the sack after not winning a trophy in a Roman Abramovich era season in west London, but Lampard is hopeful that the expectation levels have changed amid a changing landscape in the Premier League.

"That will always be something that will not be in my control," he said of any reaction from the owner to his season. "And you have to look at the landscape changing. That is the debate, about where we are as a club now and what squad we have now to what we have had in previous years.

"We just have to work with what is in front of us and that is to try to win games. There'll be many managers in the Premier League this year that will be looking at their wins or points totals and it's nowhere near where they were at different times because this league has proved very competitive - barring Liverpool of course and a bit of Manchester City.

"But the rest of us are fighting for consistency and fighting to improve. I think Chelsea fans do understand that."

Lampard has a host of injuries ahead of the match, with Andreas Christensen's knock added to a list of injuries that includes Christian Pulisic, Callum Hudson-Odoi, N'Golo Kante and Tammy Abraham.

One change he could make to boost his team is to recall Chelsea's ?71 million ($90m) record signing, Kepa Arrizabalaga, to the starting line-up after dropping him in recent weeks.

He insists any call to recall the goalkeeper will be down to his training sessions and not any fears over his Euro 2020 chances with Spain's national team.

"I haven't discussed it with him and I can only pick the team as I see it from a Chelsea point of view," he said. "It's not one I jump ahead to broach. I keep coming back to the same thing: it's how well you train, and he is training well, and when you get the opportunity to play, how well you play.

"He must have a positive attitude and I think I'm a pretty fair man - I don't know if all the players will say that! Maybe 11 will tomorrow and then another 11 next week! That's the nature of my job.

"I only call it as I see it, as I see training and performances. So I hope all the players remain positive and, of course, he can play for his country. He's shown that already. He's been number one at times ahead of David de Gea, who is a fantastic, world-class goalkeeper, so that hopefully isn't a big issue at the moment. He's training every day to be ready for us when needed."