Lampard: Barkley wants more from his Chelsea career after having the wonderkid tag 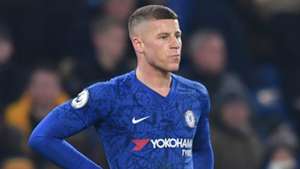 Frank Lampard thinks Ross Barkley will have wanted to be more important in his Chelsea career since making the move from Everton two years ago.

Barkley is set to start against his former club on Sunday afternoon as an injury crisis hits Chelsea's midfield after they were still able to beat Liverpool 2-0 in the FA Cup in midweek.

The 26-year-old produced arguably his best performance yet in a Chelsea shirt and scored the second goal to clinch the match with a 40-yard run from inside his own half before driving a 20-yard shot past Adrian in goal.

Still, some may have expected more from Barkley in his Chelsea career and he has often found himself in and out of the team under Antonio Conte, Maurizio Sarri and now Lampard.

Lampard admits that Barkley will want more from his career but he still sees him as a big part of his plans at Stamford Bridge.

"I have choices not just in Ross but in that area," Lampard told reporters at Cobham Training Centre. "All the players have been out at times. Ross probably had a longer time out and had an injury that was a niggly one that was around for the best part of six weeks.

"Some of that was around the early part of the season where Ross wasn't getting in. He could look at himself and say he could be doing better, probably. But Ross has taken that on in the most positive way possible.

"He has worked hard, got his nose in the team and he does need confidence as a player. I believe that. So, to try and play him, give him minutes, is always going to help with confidence. If he plays like he did against Liverpool and Tottenham recently, then he is going to be a big player for this club.

"I have been pleased with his recent performances and he needs to keep churning them out. I definitely know he has the intention to. I see it on the training pitch and how he holds himself every day in this period, so I am happy with Ross."

Barkley burst onto the scene at Goodison Park as a 17-year-old and then earned his first England call up two years later which led him to be widely described as an English wonderkid.

Everton's former manager Roberto Martinez said Barkley was a combination of Paul Gascoigne and Michael Ballack in 2013, although he has yet to live up to that billing.

Lampard admits that it isn't easy for players to deal with the hype and he has told Barkley not to look back on what could have been for his career.

"I never had that [wonderkid hype]," he added. "You see certain players have had that harder pressure at 18 years old and that's not easy for anybody. The Premier League is competitive and tough.

"It is very easy to make those early conclusions on players without knowing there's a long path and everyone's route is different. What Ross can say is that he has moved on from it and come to Chelsea which is a big club.

"If he is playing games here at a big club then that's a success. Gareth Southgate is very confident of picking him for England and he has played a lot of minutes for them. I know he will want more and I get that.

"He might be wishing he made more minutes by now and made more impact here at Chelsea. Some of that is competition for places and some of that is injuries he has had at different times in his career and the reality is there is no point on looking back on any of that.

Lampard is another player who Barkley has been compared with after he took his famous number eight shirt upon signing for the Blues in 2018.

The Blues boss is Chelsea's all-time top scorer with 211 goals over his time at the club and Barkley has previously cited the legendary midfielder as a role model. Lampard believes Barkley is capable of scoring more frequently but thinks he has more to his game than just goals.

"I think what Ross will be searching for is minutes to play regularly to get the consistency to do what he was able to do the other night against Liverpool because it is clearly within his powers. His shooting with his right foot and left foot is as good technically as I have seen on a training pitch. I knew that as a player.

"Also, his ability to go passed someone in advanced areas in midfield, his skill and ability to do that. So I think that's well within his range so he couldn't get too caught up in where he is at, where he is, what might have been other than to train every day which is what he is doing at the minute.