Lacazette: It’s my job to give Arteta a headache after struggles for Arsenal starts 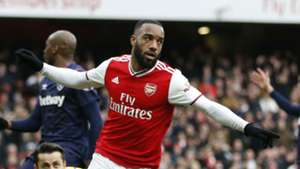 Alexandre Lacazette is happy to be offering Mikel Arteta "a big headache" at Arsenal after stepping off the bench to snatch a match-winner in a derby date with West Ham.

The France international considers it to be his "job" to offer selection posers to his manager in north London as the Spaniard weighs up the options available to him.

Arteta will have needed no introduction to Lacazette, as a proven goalscorer at the very highest level.

The 28-year-old has, however, struggled to nail down a starting berth of late and has seen academy graduate Eddie Nketiah edge ahead of him in the pecking order.

A telling contribution against the Hammers should aid his claims to a more regular role, with Arsenal needing inspiration from somewhere in what had been a largely forgettable display.

Lacazette required interference from VAR to get his goal at Emirates Stadium on Saturday, but was delighted to give his boss plenty of food for thought.

The Frenchman told BBC Sport: "I'm happy to score for the team. We worked hard. It was a difficult game. I'm happy. They deserved more because of the chances they created. This is football, sometimes you don't get what you deserve.

"It is my job to give the manager a big headache. I'm struggling to make the first team but I'm happy to score again today.

"I know that now I have to play well again the next game. Everyone wants to give their best and it's normal that whenever we do that we will perform as a team."

Lacazette is now up to nine goals for the season, with seven of those coming in the Premier League.

Of his English top-flight haul, all of them have come on home soil at Emirates Stadium.

He will be hoping that there are many more to come, with questions being asked of his future with no new contract committed to, but is preparing to head back out on the road.

Arsenal are due to take in a meeting with Manchester City on Wednesday before then heading to Brighton.

Those outings will be followed by an FA Cup quarter-final clash with Sheffield United at Bramall Lane.

The Gunners must wait until playing host to Norwich on April 4, after the next international break, before running out in front of their own supporters again.