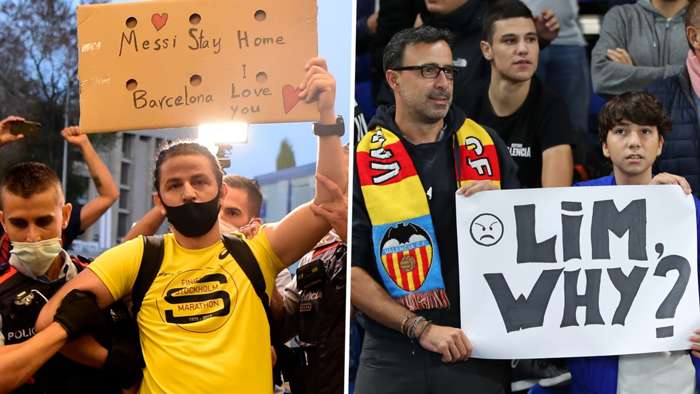 Protests have only just begun outside Camp Nou, with Barcelona poised to lose superstar Lionel Messi, but they have already been raging for a long time at Valencia, where years of inadequate management are taking a brutal toll.

Peter Lim’s Meriton Holdings took over in May 2014, when they bought over 80 per cent of the club’s shares, and, after helping stave off administration, they have driven the club downwards, as well as angering vast swathes of Los Che supporters.

Valencia are a club convinced they belong at the top table in Spain, and even in Europe, but they are at a low ebb, with fans watching their team’s best assets stripped away in a torturous summer window, as financial problems leave them looking at a no-frills, low-cost future.

The latest player to leave is striker Rodrigo, a key figure for Spain in their impressive Euro 2020 qualification campaign who has completed a move to newly promoted Premier League side Leeds United for around £27 million ($35m).

This is a player that Atletico Madrid came very close to signing last summmer, while Barcelona also considered making a move in the January transfer window. Even though the Catalans are no gleaming example of shrewd spenders, their interest illustrates how highly Rodrigo is rated in Spain.

At least Valencia have secured a transfer fee for the forward. Club captain Dani Parejo was allowed to join neighbours Villarreal for nothing, in an embarrassing money-saving and power-clutching exercise.

Parejo is a Valencia legend but he was casually axed by Meriton – without so much as a proper send-off after virtually a decade at the club – because he dared to question those in suits above him.

It took a while for Valencia supporters to warm to Parejo, who had ups and downs during his time at Mestalla, particularly when Gary Neville was in charge, but in the end he made his mark, even as Lim & Co. try to wash it away.

Parejo captained Valencia to Copa del Rey glory in 2019, over Barcelona, but the photo of him holding the cup was swiftly removed from the club’s megastore as they bid to remove all trace of him, just as they had done with former coach Marcelino Garcia Toral.

Indeed, the attempt to eradicate Parejo's legacy was partly down to his loyalty to Valencia’s best manager in years, which Meriton despised.

While giving his own goodbye to the supporters of the club he wanted to retire at after almost 400 games, a tearful Parejo explained how even his son asked him why he was moving to another team.

He had simply been forced to follow Francis Coquelin to Villarreal, who moved to El Madrigal as part of a deal worth €8.5m (£7.6m/€10m) – barely even a fair price in the coronavirus era for a tidy, effective and committed defensive midfielder.

And then there's Ferran Torres, Valencia's up-and-coming superstar who was sold to Manchester City for just £21m ($27m).

The winger is a Valencia fan and had been on their books since the age of seven. However, he had entered the final year of his contract, having refused to sign an extension with a club in disarray.

The fee was nonetheless ludicrously low for a player of such enormous potential but Valencia are desperate for cash.

Indeed, even after the numerous sales, the club was forced into giving the remaining members of the squad IOU notes in place of their wages.

Valencia assured the players that they will be able to pay their salaries by September, but it was a development that only further bewildered a dressing room which is already demotivated and depleted.

Such stories obviously don't draw as much global attention as Messi's Barcelona departure, but they are just as demoralising for the club’s supporters, who are seeing the squad gutted and hopes of a good 2020-21 campaign slipping away already.

"Some Valencia CF fans are scolding and cursing at my family and I,” wrote Lim’s daughter Kim on Instagram, in a post she since deleted.

"Don’t they get it? The club is ours and we can do anything we want with it ... no one can say anything.”

That is the kind of pathetic attitude which has rankled with supporters, and means that even when Meriton have a point, they are given short shrift.

"We are going to have a complicated season because of Covid-19, so we must be responsible and control costs tightly. What use is a bankrupt club?” club president Anil Murthy said of the recent departures.

"If things go very wrong in the financial aspect due to Covid-19, all clubs will be in trouble. We have to lead through responsible management during the crisis.”

Murthy came across clearly and reasonably well, as usual, but it ignores the factors that left Valencia in such a perilous financial position before the pandemic struck.

Their best performance under Lim's ownership is fourth, which is not great when one considers that between 2010 and 2012, they were third three seasons running.

Champions League qualification might have been possible last season, too, had they not self-sabotaged by sacking Marcelino, Valencia’s most successful manager in over a decade and a man loved by fans and players.

He had secured back-to-back top-four finishes before then winning the Copa del Rey, only to be sensationally dismissed at the start of the 2019-20 campaign, just days before a trip to face Chelsea at Stamford Bridge.

Intriguingly, Marcelino thinks that success got him sacked.

“I’m absolutely sure, I don't have any doubts, that the cause of this situation was the Copa," he argued at a news conference.

"During the season we received messages, direct and indirect, telling us to ignore the competition.

"Winning the trophy was the cause of this entire situation, who would imagine that?"

Marcelino received no congratulations message from Lim or anyone at Meriton, even as fans and players celebrated jubilantly.

To replace him, the club picked the inexperienced Albert Celades, who was sacked himself in June after nine months at the helm, while the club's sporting director Cesar Sanchez resigned.

Long-term employee Voro took over on a temporary basis, for the sixth time, which tells a tale of its own, before Javi Gracia was given the job for this season.

It would be no surprise, especially given the state of affairs at the club, if he joins a long list of sacked coaches in six years of Meriton control: Nuno Espirito Santo, Neville, Pako Ayestaran, Cesare Prandelli, Marcelino and Celades.

The ridiculous appointment of Neville alone was enough to for the fans to turn on Lim, having wasted millions on failed Jorge Mendes 'recommended' transfers before that, and the protests have raged ever since.

Arsenal are yet to begin contract talks with Alexandre Lacazette, manager Mik...
More