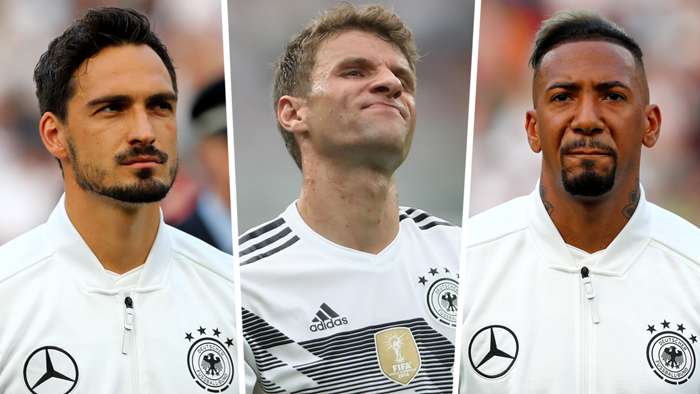 Since thenGermany's form has only worsened, leading to calls for a decorated trio to return, with Kroos the latest man to indicate Low should reconsider his stance with regards to selecting more experienced players.

Asked if he would like to see Boateng, Muller and Hummels recalled ahead of this summer's European Championship, the Germany midfielder told Sky Sport Germany: "I'm pretty self-conscious because, firstly, I'm a national team player, secondly, thank God, I don't have to make a decision, and thirdly, I've played with them for many years.

"The problem is what I see, at least in the reporting - if you only focus onthat - is that you would have a different national team after every Bundesliga matchday, and we all know that that doesn't work.

"I believe that in the end you have to plan a little ahead. I am now questioning whether the coach's plan has worked out in the way he wanted it to be.

"It is clear that the intention after the World Cup was relatively clear. And now you have to find the best possible team for the next tournament."

All three men in question could put forward strong cases when it comes to being reinstated at international level, with their form on the club scene still as strong as ever.

Boateng and Muller helped Bayern win the Bundesliga, Champions League and DFB Pokal last season, and look set to add more silverware to their respective collections come the end of the 2020-21 campaign.

Hummels, meanwhile, has been a solid presence in Borussia Dortmund's defence since returning to the club from Bayern in 2019, helping them fight for honours Germany and in Europe.

Low came under intense pressure to bring back a talismanic trio aftera humbling 6-0 defeat to Spain in the NationsLeague back in November.

That result ensured that Germany finished second in League A, Group 4 behind La Roja, who qualified for the finals at their expense.

Germany conceded a total of 13 goals during their six group games - the worst record of any side to finish in the top two in their pool.

Germany were drawn in the so-called 'Group of Death' for the European Championship, alongsideHungary, Portugal and France.

Portugal are the reigning European champions and also lifted the inaugural Nations League crown in 2019, while France won the 2018 World Cup.

Low will be required to submit his final squad for the tournament in May, meaning Boateng, Muller and Hummels still have three months to try and force their way back into his setup.