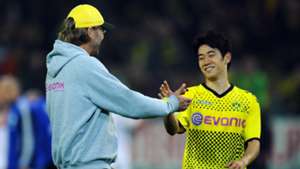 Real Zaragoza midfielder Shinji Kagawa has revealed that Jurgen Klopp told him Borussia Dortmund beat Bayern Munich to the Bundesliga title during the pair's time at Signal Iduna Park because the Japan international was in the team.

And Kagawa, who was a key cog in Klopp's BVB machine, was able to share that glory with his former boss, with the German trainer going on to offer his player a much needed boost at a time where his future at the club was not certain.

"He said I wasn't playing enough games for Dortmund, even thought I told him I was OK," the 30-year-old explained to The Athletic. "He knew me well, so maybe he knew that I was not OK. He told me that my style would be suited for Spain - I told him that I'd always wanted to play there."

Kagawa added: "He told me that Dortmund became champions of Germany because I had played for them. Of course there were other players, but that really lifted my confidence. 'You don't need to worry,' he told me. I didn't worry. Those words made me happy, I'll never forget that moment."

Following interest from Manchester United, Kagawa did eventually leave Westfalenstadion, but he remembers his time playing under Klopp with great fondness and gave some insight to the way the Champions League-winning coach approaches his role.

"I never lost a game against Bayern Munich until Pep Guardiola arrived," Kagawa went on. "He made them better. Bayern had more money, more history and a better level of players than us.

"He wanted us to focus on ourselves, not to listen to what people were saying about us. It was all about the next game and only the next game. There was a lot of passion with Klopp, I felt that most in the dressing room before games.

"He always had a big smile. He hugged every player. I loved his attitude - he was never nervous. He gave us confidence."