Klopp's Scouse gem! Jones is showing he can be a Liverpool star

Klopp's Scouse gem! Jones is showing he can be a Liverpool star 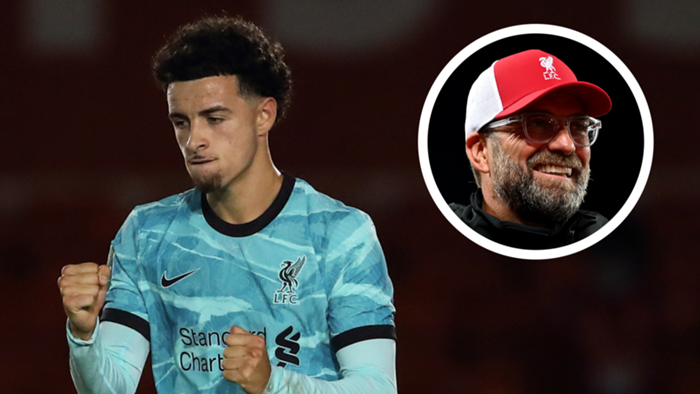 If only Curtis Jones had a little self-belief, eh?

Jones scored twice as Liverpool saw off Lincoln, the leaders of League One, 7-2 at the LNER Stadium. Just 19, the young attacking midfielder continues to make his presence felt with the Premier League champions.

That’s five goals now in just 16 first-team appearances. Amid all the (understandable) excitement surrounding new signings, Klopp knows he has something special developing within his own ranks. Jones, like Trent Alexander-Arnold before him, looks a star of the future.

“A proper squad player at this moment in time,” said assistant manager Pep Lijnders on Wednesday. Lijnders has been one of Jones’ greatest advocates, having worked with him as a 16-year-old youngsteras part of Liverpool’s ‘Talent Group’ at Melwood.

Three years later, Jones is firmly established within Klopp’s first-team group. While other gifted youngsters leave the club, he is going nowhere – except, perhaps, to the very top.

Midfield competition is fierce at Anfield following the arrival of Thiago Alcantara. Klopp has Fabinho, Gini Wijnaldum, Jordan Henderson, James Milner, Naby Keita and Alex Oxlade-Chamberlain all hoping for games, while Marko Grujic provided a reminder of his own qualities at Lincoln. The Serbian midfielder scored Liverpool’s sixth goal, though the likelihood is that he will be sold before the transfer window closes.

That is the level the Reds are operating at now, and Jones is very much part of that level. Technically and physically, he looks ready. Tactically, his development is there for all to see.

Put simply, he looks as if he belongs. There is a swagger about his play, an inner belief which transmits every time he picks up the ball. Fear isn’t in his vocabulary.

He took his goals well, the first bent superbly into the far corner of Alex Palmer’s net after Divock Origi had knocked the ball down to him.

Philippe Coutinho-esque, you could say.

That made it 3-0 to Liverpool, after Xherdan Shaqiri – another midfield option, on this evidence – had curled in an early free-kick and Takumi Minamino had smashed in a second. It didn’t take Jones long to lengthen their lead either, though this time his curling strike took a deflection on its way past the helpless Palmer.

Minamino, bright as a button, made it 5-0 after half-time, following up after Harvey Elliott’s shot was saved. At 17, Elliott was the youngest player on display, and his name is most definitely one to remember.

Liverpool gave a debut to another teenager, 19-year-old Rhys Williams, at centre-back. Williams was playing for Kidderminster at Spennymoor Town in the sixth tier of English football a year ago but found himself alongside Virgil van Dijk in the first half and Fabinho in the second. He didn’t disgrace himself, though Liverpool gave up their clean sheet in the second half.

Grujic and Divock Origi, both with smart finishes that perhaps Palmer should have saved, made sure there was enough gloss on the scoreline. Take the opposition into account, by all means, but it should be noted that Liverpool’s squad, for now at least, looks stronger than it ever has. Klopp has options, and that is a scary prospect for the Reds’ rivals.

The night, though, belonged to Jones. Klopp's Scouse gem,who ended with two goals and the man of the match award for good measure.