Klopp regrets celebrating in front of linesman amid VAR frustration 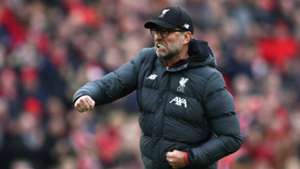 Jurgen Klopp acknowledged he would not be looking to repeat his celebration of Liverpool's winner against Bournemouth as the manager directed his fury at a nearby official.

Liverpool, looking to avoid a fourth defeat in five in all competitions, had trailed early on after Callum Wilson netted the opener at Anfield.

But the Reds were outraged the goal was allowed to stand, as Wilson appeared to shove defender Joe Gomez prior to the goal.

Goals from Mohamed Salah and Sadio Mane recovered the victory for Liverpool, but Klopp responded to the second strike by angrily gesturing towards the assistant referee who had not spotted the supposed foul.

"To be honest, yes, that happened," Klopp said in a post-match news conference. "Would I do it now? No. But in this moment I just don't understand how this could be a goal.

"There are situations, we talk about it, stuff like this, but now we have to make a decision. This shows the problem of VAR still existing. It's not a VAR, it's not a system, it's a human being and the rules.

"It was a foul. The touch was enough to let Joe struggle - it was a foul, nothing else. They score a goal in the next situation, the ref lets it run, that's why we have VAR, so we can have a look later.

"Two or three weeks ago, the VAR made really difficult decisions on one matchday in two different games - I think with Tottenham and [Manchester] City, I'm not quite sure.

"But [I was] like, 'Wow, how is that possible that someone sits there and doesn't see it?' So now, for me, the question is how is it possible you have a look at it and don't say, 'Ah, it's a foul'.

"Mike Dean [the fourth official] I'm sure saw it was a foul, but it's not his job, he cannot intervene anymore, so it's then VAR. And the VAR hides behind the phrase 'not clear and obvious'. It makes no sense.

"A foul is a foul, no foul is no foul, you can let it go, whatever, it's no problem. But if it's that clear and you look at it and say, 'Come on, play on', nobody felt comfortable after that.

"Not the ref, everybody knew something happened here which is not okay. That is easy to sort with someone sitting in the room in front of a screen says, 'Yeah, come on, foul'. That's it.

"I understand 100 per cent Bournemouth maybe sees it different, but it's a clear, clear foul. Arms like this, it's not possible in that situation.

"So I celebrated a little bit in their direction. I'm not happy about it but it happened and I didn't say anything while I was celebrating."

Replacement Jack Simpson was at fault as Mane teed up Salah to equalise.

"The big moment for us really is Steve Cook's injury," Howe said. "That's a hammer blow for us at that moment of the game when we'd started so well, to lose our captain and the relationship he has with Nathan [Ake] at the heart of our defence.

"I think the reshuffle to our back line wasn't helpful to us and it's very difficult for players to come in and get adjusted to the speed of the game and probably Jack fell victim to that."