Klopp rallies Liverpool to 'restart' after unbeaten run is broken 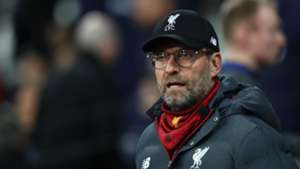 Jurgen Klopp urged Liverpool to "restart" after their unbeaten Premier League run came to an end against Watford.

Liverpool suffered a stunning 3-0 loss at Vicarage Road on Saturday, ending a 44-game unbeaten streak in the Premier League.

The Reds were sunk by a plucky Hornets side, who scored three second half goals to earn a deserved victory.

Klopp's men are back in action on Tuesday, when they make the trip to Chelsea for the FA Cup fifth round.

The German is eager to see Liverpool, who hold a 22 point lead atop the Premier League, reset heading into the final months of the season.

"Sometimes a little knock is important. So I don't see anything negative in it," Klopp told UK newspapers.

"From time to time if you are not good enough, you need to see [the] effect. Not good enough - what happens then? So restart.

"Maybe the longer the run goes maybe it becomes more important. But I didn't see that. Now it is over. We can start again with whatever we did before, and we will."

Liverpool have struggled to find their best form in recent matches, having recorded narrow wins over Shrewsbury Town, Norwich City and West Ham - while losing to Atletico Madrid in the Champions League last-16 first leg - since thrashing Southampton at the start of February.

Klopp is unsure what kind of reaction he will get from his team after their run was ended.

"You cannot win the amount of games the boys have done if they are easily influenced by the outside world, and we will see how they react," he said.

The Reds have won the FA Cup seven times and last lifted the famous trophy in 2005-06 after a penalty shootout victory against West Ham following a 3-3 draw.

After meeting the Blues in the cup, Liverpool will face Bournemouth in the league at Anfield before a second leg meeting against Atletico in the Champions League.