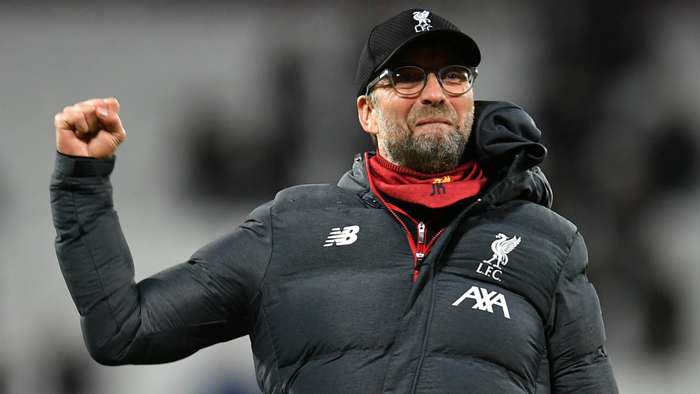 Jurgen Klopp says he is looking forward to one of the greatest days of his life when Liverpool finally get their hands on the Premier League trophy this week.

Liverpool will be presented with their 19thleague title following their game against Chelsea on Wednesday night, and will lift the trophy on a specially-built podium in the centre of their iconic Kop stand.

Dalglish, perhaps the club’s most legendary figure, will be part of the presentation team alongside Premier League chief executive Richard Masters.

The Scot was manager the last time Liverpool were champions, and actually made the last of his 515 appearances for the club as a player on the night they lifted the old First Division trophy against Derby on May 1, 1990.

Klopp, though, says fans should not expect something similar from him on Wednesday.

“The first thing I have to say is that there is no chance that I will come on as a sub in the game tomorrow!” he laughed. “Maybe that’s the most important information for everyone!

“It’s absolutely great that Dalglish will be involved. The game when we became champions, we were in the hotel with all the different duties we had to do, we saw Kenny and Graeme Souness sitting there and how much it meant to them. It was really nice to see.

“This club touches you, gets you and you could never get rid of that. The club is too big and too emotional.

“I’m really happy that Kenny will be around. He deserves it. The best and most deserved nickname in the world is King Kenny, and he will be there in the stadium, where he has to be.

“I’m happy about that, as happy as I was for Steven Gerrard too. We had some messages through lockdown and after. It means so much to him, it means so much to Carra (Jamie Carragher), examples of players who tried so hard in the past.

“They know exactly what this team did. They know how big the pressure can be when you are close to it, and my boys dealt sensationally well with it. I’m happy that they recognise it, and that my boys recognise how much it means to that generation of outstanding players. They have a massive Liverpool heart, and this is for them as well.”

Discussing his emotions ahead of tomorrow night, Klopp admitted it would be a momentous occasion, and that his preparations for the game had been difficult knowing what is to follow the final whistle.

“I will try to be prepared for it!” he said. “It’s really difficult, to be honest, and quite a challenge.

“From a professional basis, it is one of the greatest days of my life. To finally get our hands on this trophy, when everyone was waiting so long and probably two or three years ago nobody thought it would be possible for us with the challengers we have.

“I will be proud, I think. Proud of the boys and all that we did together at this club. It’s a milestone, 100 per cent, and we should see it as such.

“How emotional? I don’t know. That’s the thing with emotions – you have to feel them!”