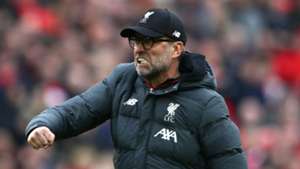 Yossi Benayoun has credited Jurgen Klopp for reviving the glory days at Liverpool, insisting he has made the "big difference" at the club following a frustrating period of mediocrity.

Liverpool became the most successful club in England during the 1970s and 80s, blowing away all competition on their way to winning multiple league titles and European Cups.

However, that success began to dry up after the formation of the Premier League in 1992, and they had to watch Manchester United emerge to take their spot as the country's top dogs.

Arsenal, Chelsea and Manchester City have also enjoyed periods of domestic dominance since then, while Liverpool's wait for another top-flight crown has extended to 30 years.

That barren run is finally set to come to an end when the 2019-20 campaign resumes following a three-month coronavirus enforced hiatus on June 17, with the Reds currently sitting 25 points clear at the Premier League summit.

Klopp masterminded the club's sixth Champions League triumph last season before also delivering UEFA Super Cup and FIFA Club World Cup honours, and his side are now just six points away from picking up a piece of silverware which has proven elusive in the modern era.

Benayoun - who played for the Reds between 2007 and 2010 - says the German head coach has created "something special" since inheriting the managerial reigns at Anfield in 2015, and he is hopeful that the current crop will continue to prosper under his stewardship for years to come.

"I'm happy to see it, it's amazing to see where Liverpool are at the moment," the former Liverpool midfielder told the club's official website.

"From what I see, they play amazing football. The most special thing is you feel they are a team - everyone knows what they're doing on the pitch, you don't have one or two big stars and everything is on them. The star of the team is the team itself, one unit. They play together.

"And the commitment the players have is something special. I don't see any other team in Europe that has this commitment from the goalkeeper to the striker to work together, to press. When they decide to press they press everyone, no-one can play against them. It's amazing.

"Of course, big credit to the manager, to Jurgen Klopp. I think this is the big difference from years before. I really enjoy watching them. Hopefully, they will continue like this and make us proud."