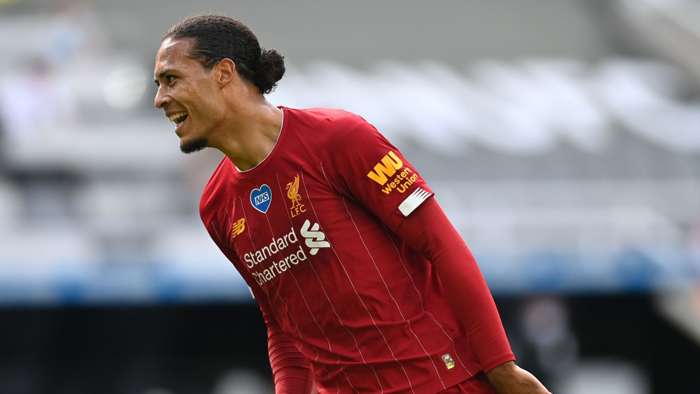 The Netherlands international had similarly started each match of the 2018-19 season as City pipped the Reds on the final day.

Van Dijk has been recognised as one of the league's most accomplished, consistent centre-backs since signing for Liverpoolfrom Southampton, yet Klopp has been just as impressed by his mindset and manner.

"I'm not sure if he needs another hour of praise," Klopp told reporters after Van Dijk scored against Newcastle United in a 3-1 win. "He's good, pretty good. He's a good centre-half.

"This makes him a pretty good centre-half and a good guy as well, which I like a lot. I would work with him as well if he was a little more difficult to be with, but he's reallylow maintenance.

"He's really nice to have. We knew when we signedhimwe'd get a really good player, but the package is sospecial,and we had no idea about that. That makes him really, really exciting."

Of Van Dijk's ever-present record, the manager added with a smile: "He takes his breaks in the games from time to time, which drives me crazy.

"But I get it, I get it. It was his big target, I think, that he could do that again. Hopefully that will be possible for the rest of his career. That would beabsolutely special.

"We've tried to rest him but it's difficult. So far, it's wentwell,and we hope it stays like this, but now he has two weeks off as well, so he doesn't need more, I'm sure."

Klopp was asked how he might describe Liverpool's season and settled on "absolutely exceptional".

"Really, how we think about it, it starts on June 1, 2019, because, yes, it was the last game of the last seasonthe Champions League final win over Tottenham, but for us it was the first game of a pretty special time.

With the Premier League set to restart on September 12, he added: "We have two weeks off and then we still have to write a couple more chapters of the book of this team."