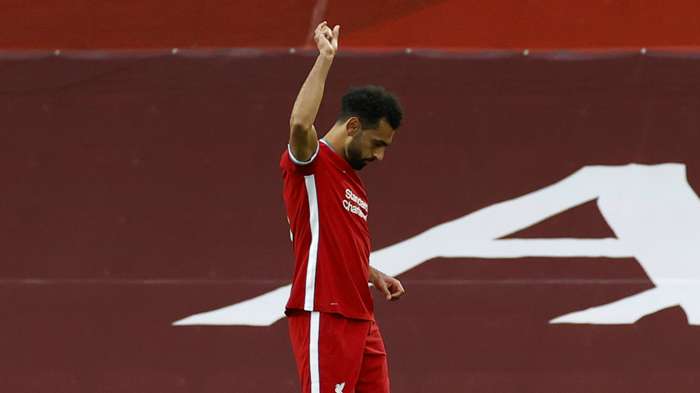 Jurgen Klopp hailed Mohamed Salah as a "very special" player after the Liverpool star scored a hat-trick in a thrilling victory over Leeds United.

Marcelo Bielsa's newly promoted side pushed defending Premier League champions Liverpool all the way at Anfield on Saturday, but Salah had the final say when he converted his second penalty of the game to seal a 4-3 win.

Salah had opened the scoring from the spotearly on after Robin Koch's handball, though Jack Harrison switfly equalised.

A frantic start continued as Virgil van Dijk swung the game back in Liverpool's favour, only to then gift Patrick Bamford an equaliser prior to a stunning strike from Salah restoring the Reds' lead, which was then cancelled out once more byMateusz Klich.

It was Salah who settled matters from 12 yards with two minutes remaining andKlopp believes the Egypt forward's all-round display showed the true quality of Liverpool'stalisman.

"The numbers tell the story a little bit, all the rest you probably don't know. But today's a very good exampleas he put three more goals on his score list, but the performance all-round was absolutely exceptional in a game like this.

"So he deserved the goals, 100 per cent, yes two were penalties, one was a sensational finish, but he deserved these goals because he was constantly present, causing the opponent massive problems.

"He was top in one-on-one situations, played football. With all the good performances he's had for us, obviously this was for sure one of the better onesand so he should be proud of that because it's very special to have these kinds of numbers. Long may it continue."

While Salah spearheaded Liverpool's fearsome attack, the Reds looked unusually ordinary at the back, with Van Dijk in particular struggling to find his rhythm.

Klopp, however, is not concerned, and suggested the fact all of his starting defenders had been away on international duty could have impacted their performance.

"I didn't really see us struggling defensively, it's just the way they play you cannot defend it 100 per cent all the time," Klopp said.

"The first goal both full-backs were deeper than the centre-halves, that should never havehappened. The second goal I think was a misunderstanding between Virgil and Alisson, it was one of the things that can happen. It should not, but it can happen. I don't think we will see these situations very often.

"So that's defending, but it's not an excuse, it was just an explanation. And maybe I don't have to give explanations, but the last line played for England, Holland, and Scotland, four days ago or whatever.

"So, all top teams but different ways of defending and it can happen and if the things are not really settled, which we are in the early stages of the season.