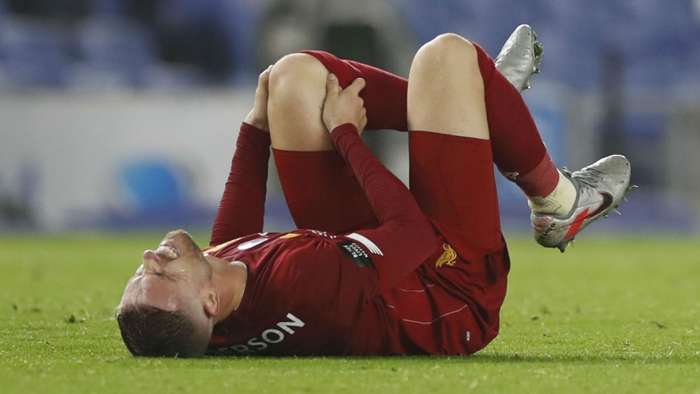 Jordan Henderson will miss the rest of Liverpool's Premier League campaign with a knee injury, manager Jurgen Klopp has confirmed.

Henderson underwent a scan at Melwood on Thursday, and while he will not require surgery on the injury, he will miss the final four games of the season.

Speaking at a press conference to preview his side's game with Burnley on Saturday, Klopp said: "It is the best possible of all the bad news. It is a knee injury, but there is no surgery needed.

"He will not play again for the rest of this season, but I'm positive he will be with us for the start of next season. He's a quick healer.

"It's not too cool, but it's the best news we could get."

Liverpool take on Burnley at Anfield on Saturday and follow that up with games against Arsenal, Chelsea and Newcastle.

The Chelsea fixture will see them receive the Premier League trophy, and Klopp confirmed that Henderson would be the one to lift it, even though he will not be involved that day.

He added: "It was an awful moment when he left the pitch, we knew immediately. In Germany, we would say that Hendo is an animal, he fights with everything. If he has pain he will never tell you. So you knew something had happened which should not have happened.

"It was a complete mood killer. We won away, and I said to the players we should be happy with that, but then everyone realises Hendo is round the corner injured. Everybody felt for him.