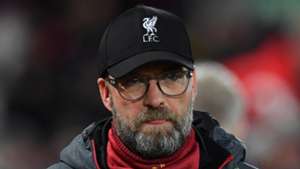 Liverpool manager Jurgen Klopp has admitted that he is "uncomfortable" with the club's current goalkeeping position.

Alisson faces around a week on the sidelines that will see him miss at least two fixtures, including the vital Champions League last-16 second-leg clash on Wednesday against Atletico Madrid, a tie in which they trail 1-0 in.

Adrian is likely to keep goal in that encounter, despite an unconvincing FA Cup display against Chelsea on Tuesday, in which he was culpable for Willian's opener in a 2-0 loss.

With the Reds having suffered three defeats in their last four in all competitions, Klopp has confessed that he is not content with his options.

"The goalkeeper situation is not comfortable, of course, but we have Adrian and we have Andy Lonergan," he said.

"So Caoimhin Kelleher is also injured [but] Adrian has made some super performances for us in the season, so while it's not good when a player of the quality of Ali is not available it is good we have a replacement."

Klopp has refused to be too downbeat about his side's recent run of results but has backed them to turn around their fortunes in Saturday's Premier League clash against Bournemouth.

"We speak about losing a football game as the worst thing that can happen to a football team," he said. "That is not why you meet, play and train, but it is still a possible result. That we lost three in three different competitions - we feel that. I cannot ignore or deny we do not feel it. It is there.

"The reaction is always possible and that is what we have always showed and we should show this time as well. And with all respect to Bournemouth - real respect - this is our game.

"We have to show that. With the situations they have in the game we should not be surprised if they have shots, crosses and set-pieces, but in the most decisive parts of the game we have to be dominant."

Despite their recent struggles, Liverpool still boast a 22-point lead at the summit of the English top flight with just 10 matches to play. As Manchester City have a game in hand, Klopp's men must win four more games to secure the title.