Klopp: I would be a real idiot to question Liverpool players' character after Watford defeat 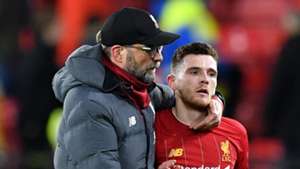 Jurgen Klopp says he didn't get angry with his Liverpool players after their shock defeat to Watford - and that he would have to be "a real idiot" to question their character.

Liverpool's sensational 18-game winning run in the Premier League came to an end in spectacular fashion at Vicarage Road, but wrapping up the title remains little more than a formality.

With a 22-point lead over Manchester City still intact, Klopp doesn't believe it would make sense to blow up at his players after their first league defeat in well over a year.

"From a common-sense point of view, if I go in that meeting and shout at them like they have lost the last 10 games in a row because of a bad attitude, that would be really strange.

"I am not interested in myself feeling better after the meeting. I am interested in the boys getting the right information and it can be more emotional - I wouldn't say angry - or less emotional.

"If you need to analyse, you analyse and analysis is not really emotional. It is looking at the facts."

He added: "I am not a little bit in doubt about the character of the boys and I would be a real idiot if I was, to be honest, because they deserve my trust, my faith and they don't lose it after a bad game."

Klopp rewatched the Watford game as part of his preparations for Tuesday's meeting with Chelsea in the FA Cup.

Having analysed his side's defeat, he is now keen for them to move on and refocus with silverware on the line.

"There is a reason for losing a game of football and I prefer seeing the reason than not knowing why," he said.

"What the heck happened now? It was not that the fortunes changed or that destiny wanted to give us a knock.

"We were just not good enough and that is the easy answer. That is filled with a lot of information that the boys get, but not too much.

"We don't want to think about that game for too long. We planned the meeting because the next game was waiting and after the meeting we could really finish with this game.

"From this moment on, it was to focus on the next game again."