Klopp: I will never compare to Shankly at Liverpool 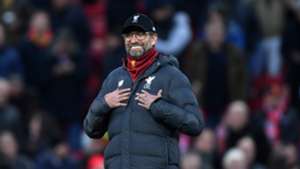 With a 2-1 victory against Bournemouth at Anfield, Liverpool became the first team in top-flight history to string together such a run of triumphs on home turf.

Shankly - a three-time title-winning manager - had achieved a stretch of 21 straight home successes to hold the record prior to Klopp's exploits.

But the current Liverpool boss insisted he could not hope to rank alongside Shankly, although he hailed the team's "fight" as they close on a first top-flight title since 1990.

Asked if he was aware of the record, Klopp told BT Sport: "Oh yes. I will never compare with this fella.

"Great, I think it was 23 [22] today. We didn't think about the number before the game, but after the game we can think about it for a couple of minutes. It's nice. It's absolutely nice. It's special, not normal.

"And the game today is an example: we have to fight hard. We are not geniuses, but we can really fight until the end of the season, and then we'll see what we get for it."

Liverpool had been enduring a wobble prior to the clash with Bournemouth, losing three of their previous four games in all competitions.

And they fell behind on Saturday, too, to a controversial Callum Wilson goal after the scorer appeared to shove Joe Gomez in the build-up to the opener.

However, Mohamed Salah and Sadio Mane hit back, sending the Reds 25 points clear at least until second-placed defending champions Manchester City play the first of two games in hand at Manchester United on Sunday.

"It was a very, very good performance after a very difficult start," Klopp said as he bemoaned VAR's failure to intervene with Wilson's goal. "There are situations that really don't help like the first goal.

"Obviously, from my point of view, it's 100 per cent a foul, nothing else. But it shows the problem with VAR as well. The ref doesn't see it, Mike Dean [the fourth official] is next to me, saying, 'Have a look, have a look'.

"Then VAR says it's not clear and obvious because you can maybe say in England that the arm like this is still allowed. I don't know how that's possible.

"But then we wanted to fight back before the game, so we had to fight really back. We did that, put them under pressure, did a lot of good stuff, had really good situations, scored wonderful goals."

Liverpool need just three more wins to clinch the title, but Klopp's focus quickly switched to Atletico Madrid in the Champions League, with his side 1-0 down ahead of the last-16 second leg at Anfield.

"Three wins to go? No, no, it's Atleti 100 per cent," he said. "That's a tough one, as we know. Of course, they will not come here and try to play a friendly game. It will be the opposite.

"Today helps, 100 per cent. Maybe [there will be] one or two players coming back - we will see - and then with a good line-up and with Anfield, we'll try to change it."